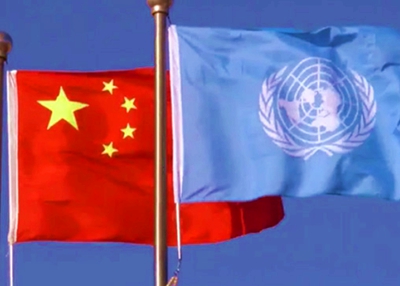 Seventy-five years ago, tormented by the scourge of war that twice brought untold miseries to mankind, countries around the world joined hands and built up an international order and system with the United Nations at the core.

As the most universal, representative and authoritative international organization, the United Nations has now become the most important multilateral arena to promote peace, and address regional and global issues.

When the international community is marking the United Nations’ 75th birthday, the COVID-19 pandemic is raging all over the world, and world leaders have chosen to hold commemorative events via video link instead. In addition to the way the leaders gather, the sudden strike of the pandemic has been changing the world in more aspects, thus the once-in-a-century transformations unfolding in the world are picking up speed.

It is truly an era of enormous uncertainty. Protectionism and unilateralism are rearing their ugly heads while sentiments of anti-globalization are on the rise. It is even more worrisome that the bullying behavior of certain superpower is posing a grave challenge to the world’s multilateral system epitomized by the United Nations.

And when mankind is struggling to beat the coronavirus outbreak as its common enemy, the spirit of solidarity and cooperation is facing a danger of being cast aside, while the specter of ideological confrontation is hovering high.

Under such circumstances, the theme of this year’s UN anniversary commemorations — “The future we want, the UN we need: reaffirming our collective commitment to multilateralism” — bears utmost significance.

Around the world, the curve of the ravaging pandemic has yet to be flattened. Infections keep mounting and deaths continue to spike. The once-in-a-century global public health crisis has once again highlighted the fact that the human race belongs to a community with a shared future, and only by joining hands can all countries steer themselves out of the plight.

Chinese President Xi Jinping has repeatedly stressed that solidarity and cooperation is the most powerful weapon in the face of COVID-19. And reaffirming the commitment to multilateralism has been particularly urgent at this dark hour of human history.

To uphold multilateralism, the world should safeguard the authority of the United Nations. Over the past 75 years, the positive role of the UN has been too obvious to deny, leaving profound inspirations as well as valuable legacies to human society.

Over the decades, the United Nations has set up and operated a collective security mechanism, and deployed more than 70 peacekeeping operations involving nearly 130 countries. Its instrumental role in effectively settling local conflicts, preventing new world wars, and preserving overall global peace and stability has helped lay a solid foundation for social and economic development worldwide.

With the presence of the UN-centered multilateral system, countries worldwide have fostered closer ties and deeper cooperation, and the global economic and social development has made a giant leap forward.

The WHO, in particular, has played an irreplaceable role amid the pandemic in keeping the world updated with accurate and timely information, boosting global coordination in pandemic responses, and promoting international cooperation on vaccine research and development.

At such a critical moment, the world should guard against and reject any unilateral move that could weaken the WHO because those moves will only take a hard toll on global solidarity and cooperation, and delay mankind’s victory over the virus.

To uphold multilateralism, the world should also acknowledge and practice the global governance concept based on the principle of extensive consultation, joint contribution and shared benefits.

The essence of multilateralism, said President Xi at the 2019 BRICS summit in Brasilia, is that international affairs should be addressed through extensive consultation rather than decided by one country or a few. His remarks ring even truer today.

In recent years, the international community has been grappling with the rise of trade bullyism, abuse of unilateral sanctions and national-security maximalism, which has further eroded the multilateral foundation of global governance.

Upholding multilateralism means that the fate of the world should be in the hands of all; international rulebook written by all; global affairs negotiated by all; and dividends of development shared by all, instead of allowing individual countries to reign supreme. President Xi has also pointed out, “in the era of globalization it should not be some people fighting against other people, but should instead be all bringing benefits for all.”

The COVID-19 pandemic tells that when faced with various global challenges, all countries should march forward hand in hand in the spirit of consultation, democratize international relations, and increase the voice of the developing countries in major global institutions so as to forge a more effective global governance system that can meet the needs of this fast-changing world.

To uphold multilateralism, the world should take development as the golden key to solving many of the most pressing global problems, and jointly build a community with a shared future for mankind.

Across the world, countries are turning increasingly interconnected and interdependent, and their future closely intertwined. Yet the development gap dividing the North and the South is still widening, and globalization has failed to trickle down its benefits to various social groups. Even in some major developed economies, poverty, gender inequality and racial discrimination have been feeding social divisions. All these have served as a petri dish for festering anti-globalization elements.

“We must hold fast to development as our master key, for only through development can we resolve the root cause of conflicts, safeguard the basic rights of the people, and meet the ardent hopes of people for a better future,” President Xi addressed the UN Sustainable Development Summit 2015 at the UN headquarters in New York.

The still raging pandemic now poses critical challenges to global development. This year marks the start of the Decade of Action to achieve the Sustainable Development Goals by 2030. All countries should take it as an alert and incentive to promote balanced global economic and social development and reduce poverty and inequality so as to fundamentally eliminate the factors that nurture protectionism, isolationism and economic nationalism, and render economic globalization more open, inclusive and balanced.

Globalization is unstoppable, and the human race shares a common future. Upholding multilateralism and building a community with a shared future for mankind should be the shared goal of all members of the international community. That is not only a significant revelation of the 75-year history of the United Nations, but also the only right path for development in the post-pandemic era.

China was the first country to sign the UN Charter. Whether in the process of the United Nations’ development or in the fight against the coronavirus, China has always been a builder, defender and practitioner of multilateralism. In the future, China will, as always, continue to be a builder of world peace, a contributor to global development and a defender of the international order.

On the occasion of the 75th birthday of the United Nations, one of the appropriate gifts the world can present is to reaffirm multilateralism and cooperation, which will help countries across the globe tide over difficulties, seek common development, and build “the future we want.”