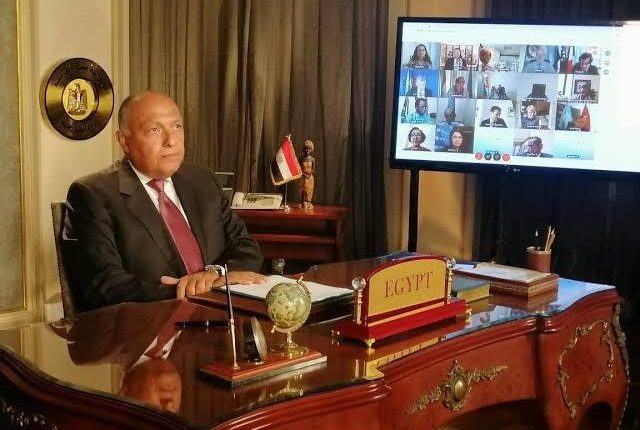 Egypt’s Minister of Foreign Affairs Sameh Shoukry demanded, on Tuesday, that the international community confront countries that support terrorism, whilst highlighting the importance of defying countries which use terrorism to achieve specific goals.

In a speech given at the opening session of the 75th United Nations (UN) General Assembly, Shoukry said Egypt’s vision is based on emphasising the values of interdependence and equality between human beings. This would also take into account the sovereignty of states over their territories and capabilities, avoiding polarisation, and raising the spirit of partnership and respect between different people and societies.

The high-level meeting, which was held online, marks the 75th anniversary of the UN’s creation in 1945. The meeting, which is placing a strong focus on the role of youth whilst ensuring the UN remains relevant for future generations, is taking place under the theme “The future we want, the United Nations we need”.

Shoukry called upon the international community, represented by the UN, to collaborate on maintaining global peace and security, and to halt attempts to dismantle national states.

At the same time, he highlighted the need to combat organised crime, whilst also combating terrorism and confronting countries that employ it. This would see countries with a particular problem in this area receive the funds to do so.

The minister confirmed the need to formulate effective rules to ensure cyber and information security, in addition to maintaining the institutional and organisational structures of institutions as part of international peace and security.

He added that the world should work to implement the UN’s Sustainable Development Goals (SDGs), and provide sustainable sources of financing that will help combat corruption and illegal financial flows.

Egypt’s permanent representative to the UN, Ambassador Mohamed Idris, said the meeting comes at a fundamental stage in the international organisation’s history. The UN is set to issue a political declaration which focuses on its achievements over the past 75 years, and the challenges it faces.

He added that as part of the UN’s 75th anniversary, the organisation conducted a digital global dialogue campaign, the results of which will be announced during the General Assembly meeting.

The campaign sought to learn more on the views of citizens from all over the globe, especially among youth populations, in order to bring them together and help solve the world’s problems.