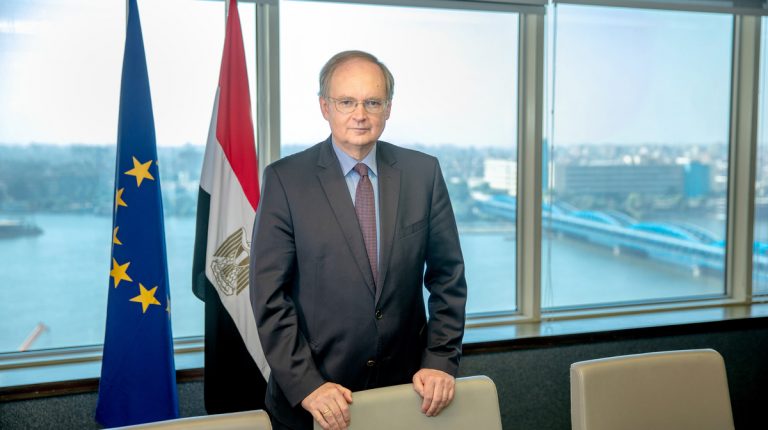 The Head of the European Union (EU) Delegation to Egypt, Ambassador Christian Berger, presented his credentials to President Abdel Fattah Al-Sisi on Wednesday.

Ambassador Berger said, “I am honoured to serve as the EU Ambassador to Egypt, and offer my heartfelt greetings and deep respect to the people of Egypt.”

“The EU and Egypt are close partners and enjoy a long-standing friendship and strong relations in many fields,” he added, “The EU is Egypt’s largest trading partner and the number one foreign direct investor, and we also work together on global issues facing the two sides, like the current [COVID-19] pandemic.”

Ambassador Berger noted that he is looking forward to working closely with the EU’s Egyptian partners in the government and civil society, as well as the business community and many other stakeholders.

“With our partners and friends in the League of Arab States we will further deepen our co-operation in the face of common strategic challenges,” he added.

Before coming to Egypt, Berger served as Ambassador and Head of the EU Delegation to Turkey from 2016 to 2020, and previously the Ambassador to Turkmenistan. From 2011 to 2016, he was the Director/Deputy Managing Director for the Middle East and North Africa at the European External Action Service in Brussels, and from 2008 to 2011 EU Representative/Head of Delegation in Jerusalem.

From 2006 to 2008, he was Head of the European Commission Crisis Response and Peace-building Unit, after serving from 2005 to 2006 as the EU-Representative to the Quartet Special Envoy, James Wolfensohn, working mainly on the Rafah Agreement (Egypt-Gaza border crossing).

In 1997, Christian Berger joined the European institutions. At first, he was responsible for relations with Syria, then Political Advisor on Middle East issues. In earlier positions, he served with the OSCE in Vienna and the United Nations in Syria (UNDOF), Gaza and Jerusalem (UNRWA).