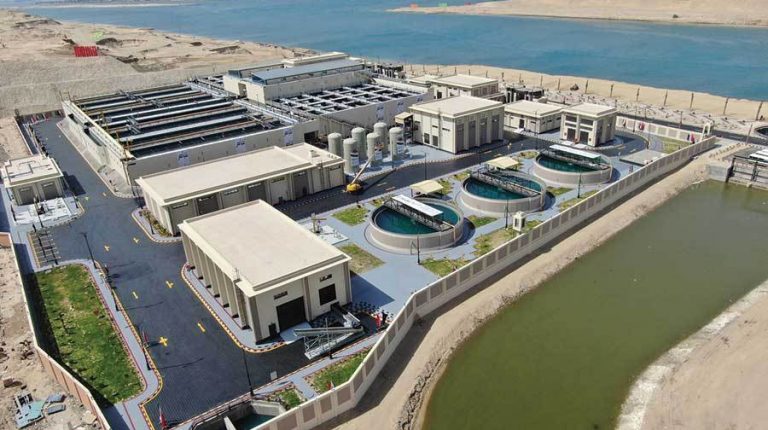 Egypt’s Al Mahsama Water Reclamation Plant project was selected as one of 30 winning projects at the ENR 2020 Global Best Projects Awards. The plant, which was took part alongside projects from 21 countries on six continents from a record number of entries for the awards, won the ENR best water/wastewater project for 2020.

The Egyptian government has long planned to settle more people and develop farmland in the sparsely populated and arid Sinai Peninsula. As part of that plan, the government and its Engineering Authority for the Egyptian Armed Forces built one of the world’s largest water-reclamation plants on the eastern edge of the Suez Canal. The plant, which was completed in just one year, aims to help the government address the growing threat of water scarcity.

With military precision, a team with designer, engineer and project manager Khatib & Alami, along with the joint venture construction team of Metito Overseas Limited and Hassan Allam Holding, completed the job on time, with 2.5 million injury-free work hours and no time lost.

“The Al Mahsama plant will significantly contribute to combating water scarcity in the country, and will have a resounding impact on Egypt’s water-security agenda, transforming the scope of wastewater treatment across Africa,” said Hassan Allam, Chairperson of Hassam Allam Construction, at the plant’s 22 April inaugurated.

Maher Kahil, Khatib & Alami’s project manager for the job, said the project was a challenge from day one when his firm learned it had only two months to design a $100m treatment and distribution plant.

Additionally, materials and supplies had to cross the Suez Canal to the site, with the team also having to make accommodations for more than 3,000 people working in the middle of a desert.

“Having all of these challenges, we had to have and handpick the best resources in order to come up with innovative ideas,” says Kahil, “When they told me that I was going to manage this project, we visited the site and I saw the canal. I was excited and thrilled about this opportunity.”

The group tapped experts from many countries, including Japan, Switzerland, Italy, Spain, Germany, Egypt, Lebanon and the UAE.

The plant has a treatment capacity of up to 1 million cbm of water a day, and was built on 42,000 sqm of land. But space, says Kahil, still was not enough for the size of the plant needed. So K&A and the JV designed vertically, reducing the space needed by 70%.

The team conducted computational fluid dynamic modelling to make sure the vertical hydraulics would work. In the end, the vertical plant offers easier operation and maintenance, and is more affordable on a life-cycle basis, Kahil says. He added that the plant’s remote location also led the team to adopt an operational system that could be completely controlled from off-site.

The plant consists of three main adjacent blocks, each 2,000 sqm, that host the main treatment units, two external blocks for flocculation and sedimentation and one multi-story central block for filtration and disinfection.

“In this project, we make use of the latest technologies for the treatment of agricultural drainage to produce suitable water for irrigation and land reclamation following the highest quality standard and specs set by the Egyptian government,” Karim Madwar, Managing Director of Metito Africa, said in April.

The joint venture was responsible for the construction and commissioning and will operate and maintain the plant for five years.

Because the Suez Canal had to remain open during the plant’s construction, materials, including 7,860 tonnes of steel, were moved across the canal on temporary floating pontoon bridges, which were constructed and taken apart by the Egyptian military when needed.

The government also wanted the project to be architecturally appealing to ships passing on the canal, Kahil says. The team worked to make sure long lead time items from Europe and elsewhere arrived on schedule when the bridges would be operational.

Another challenge was handling the sheer volume of labourers who worked in three shifts around the clock. Kahil says the team turned to crowd-management experts who had worked on managing the thousands of people making pilgrimages into Mecca and Medina. Containers were erected in multiple places at the construction site for workers to rest and receive instructions.

To keep the job site safe, the site manager met daily with workers, providing instructions about what safety measures were necessary, depending on the equipment being used.

Egypt has since tapped Khatib & Alami to help develop a reclamation plant five times as large on 620,000 sqm of land, also on the peninsula and east of the Suez Canal.