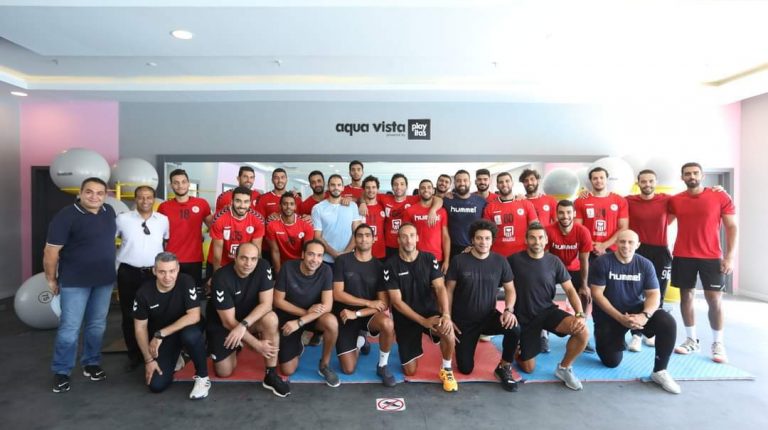 Egypt’s national handball team, led by its Spanish coach Roberto Garcia Parrondo, has brought its training camp in Hurghada to a close, in preparation for the 2021 World Men’s Handball Championship. The international event is set to be held in Egypt from 13 to 31 January 2021.

The team travelled to Hurghada for a training camp between 9 and 23 September, as part of their preparations for the upcoming championships. Garcia started the camp by presenting a lecture to the team’s players before entering the training session.

In the early days of the camp, the Spanish coach started with light training sessions to avoid stressing the players, before gradually raising the load to increase their physical performance.

The team received a warm reception upon arrival from the officials at the Albatros Aqua Vista Hotel. The management highlighted its keenness to provide a festive atmosphere to raise the morale of the players before engaging in the preparation period.

The Egyptian Handball Federation’s (EHF) Board of Directors agreed to the request made by the team’s players to transfer the camp to Hurghada, to ensure that all comforts were on hand to achieve a positive result in the upcoming World Championship.

National team players Ahmed El-Ahmar and Karim Hindawi thanked the resort’s management for their hospitality and providing all means of comfort.

Team manager Nour Abu Zeid confirmed that Garcia focused on technical plans during the camp, particularly after the six-month suspension due to the novel coronavirus (COVID-19) pandemic.

Abu Zeid added that the Spanish coach is reassured about the physical condition of the players.

The World Handball Championship draw resulted in Egypt’s national team being placed in Group G, along with Sweden, the Czech Republic, and the qualifying team from South America.