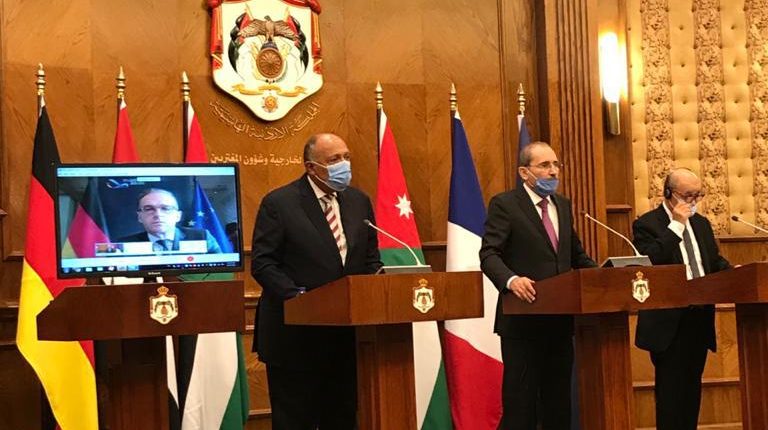 Egypt’s Minister of Foreign Affairs Sameh Shoukry said, on Thursday, that Egypt attaches great importance to reaching a fair and comprehensive solution to the Palestinian cause.

This solution should meet the aspirations of the Palestinian people and their legitimate rights to establish an independent state, with Jerusalem as its capital.

Shoukry’s remarks came at a press conference following a meeting in Jordan’s capital, Amman, with his Jordanian, German, and French counterparts.

The Foreign Minister affirmed the need to achieve security and stability through establishing the independent State of Palestine, in accordance with international legitimacy.

Shoukry added that the Amman meeting is significant, as it aims to agree on the appropriate mechanisms to advance the existence of peace, bridge views and open channels of communication between the two parties of the conflict. It also targets working to reach formulas that lead to a solution to this protracted conflict.

The minister pointed to the recent peace agreements to normalise relations between Israel on the one hand, and the UAE and Bahrain on the other as an example of one such solution.

He described the agreements as an important development which will lead to further interaction and support for a comprehensive peace in the region, based on international legitimacy and the adopted decisions.

Moreover, Shoukry said that Egypt will continue to work with partners to enhance the chances of success in reaching a comprehensive peace. He noted that this should be reached through coordination between the partners and creating new frameworks to attract the parties to more interaction, to avoid the political blockage and its consequences.