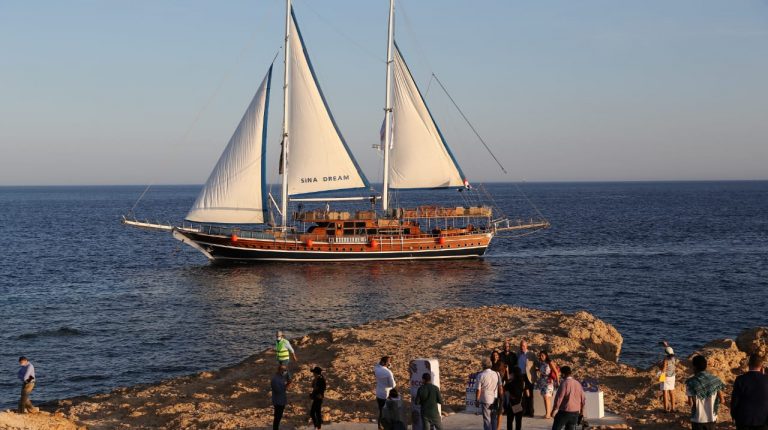 The Ministry of Environment launched the “Eco Egypt” campaign, on Friday, as Egypt’s first campaign to promote its protected areas, raise awareness about environmental issues and the importance of preserving natural resources.

The campaign, which has received funding from the Global Environment Facility (GEF), was launched in cooperation with the Ministry of Tourism and Antiquities and the Ministry of State for Information.

Also involved in the campaign are the United Nations Development Program (UNDP), and the Egyptian NGO, Mainstreaming Biodiversity in Egypt’s Tourism (MBDT).

The launch ceremony took place in the Ras Mohammed Nature Reserve in the South Sinai Protectorate. Minister of Environment Yasmine Fouad, Minister of Tourism and Antiquities Khaled Al-Anani, Minister of State for Information Osama Heikal, and Minister of Civil Aviation Mohamed Manar Enaba, were present at the ceremony. Also in attendance were 30 ambassadors to Egypt, as well as other embassy representatives, in addition to public figures representatives of international media.

Fouad said that the campaign represents one of her ministry’s targets to open new horizons for sustainable ecotourism in Egypt. It also represents a Ministry of Environment target to develop the reserves implemented during the last period, by developing the infrastructure and services provided to visitors in 13 reserves.

The minister also that Egypt’s political leadership is paying great attention to the country’s natural reserves, due to their importance. This high-level concern helps in developing, managing and preserving the reserves according to international systems, whilst also maximising their economic, social and cultural development.

At the same time, the campaign is designed to preserve Egypt’s biodiversity in a way that supports the country’s environment and the national economy.

She revealed that the “Eco Egypt” campaign comes within the activities of the “Go Green” presidential initiative that raises awareness on environmental issues, and provides a true model for sustainable development.

It will do so by maximising the sustainable use of protectorates, whilst raising awareness of their importance and the importance of large-scale participation in their protection. This will take place by integrating the local community in cooperation with youth, the private sector and civil society.

During the event, Heikal said that the campaign represents a great opportunity to highlight that tourism does not come into conflict with environmental projects. Instead, the increased emphasis on ecotourism which can attract more tourists and benefit Egypt’s economy and local communities.

Heikal added that the launch comes as part of the government’s tendency towards collective work and large-scale collaboration. He noted that the Ministry of State for Information is keen on cooperating with other ministries and entities at all times.

Al-Anani also said that his ministry is cooperating in many areas with the Ministry of Environment to revitalise Egypt’s tourism, which is one of the main pillars of the country’s economy.

He added that work is currently under way to encourage responsible ecotourism and sustainable tourism. These efforts are aimed at preserving Egypt’s environment whilst integrating local communities, which is in line with new global trends in tourism.