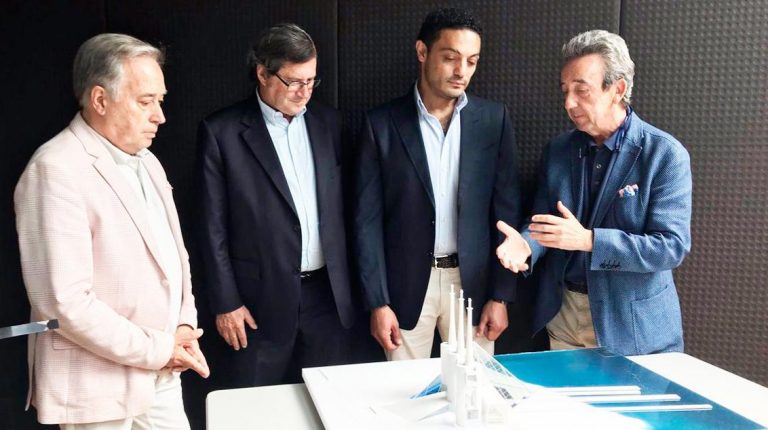 In 2019, Ali, through his construction company Amlaak, proposed a grandiose project merging a pyramid with the set of Barcelona’s famous Tres Xemeneies of Sant Adrià del Besós (Three Chimneys) landmark. The latter are the remains of an old thermal power station that has been in disuse for several years, and which still has no defined future.

Crónica Global, a major Spanish news outlet which investigated the project, found out that Ali had spent €200,000 to use the project as a front with which to gain media access as an opposition leader.

According to the newspaper, Ali undertook a contract with the consultant Rafael Salanova Roma, who managed the project’s proposal for €50,000, excluding VAT, with the sum to be paid out over 10 payments.

“Half of those payments were made by bank cheque made out to Rafael Salanova, and the other half was made in cash,” Crónica Global reported, “This led to a complaint against Ali for an alleged crime, which was filed with the Unit of Economic and Fiscal Delinquency (UDEF).”

Ali is also said to have paid the architectural firm Alonso Balaguer y Arquitectos Asociados a sum of €30,000 for the project’s blueprint. Finally, to ensure media access, Ali contracted a well-known Barcelona communications agency for €40,000, which gave him access to several Spanish media outlets to promote his project.

According to Crónica Global, Spain’s tax watchdog Agencia Estatal de Administración Tributaria (AEAT), UDEF, and the Catalonia police force are investigating Ali for tax fraud. Ali now faces allegations that he used the project as a facade, with no due diligence performed, and no investment plan in place. He also has allegedly not gained permission for the project under Catalonia’s Metropolitan Urban Master Plan (PDUM).

In 2018, Ali went to Spain on a golden visa, which allows residency in exchange for buying a property worth more than €500,000. The contractor, who had previously been based in Egypt, caused controversy last year in an attempt to stir up protests in Egypt by broadcasting online videos critical of the country’s government.

Through a series of YouTube videos, some of which were broadcast by anti-regime channels based mostly in Turkey and Qatar, the fugitive contractor and part-time actor claimed that the army owes him millions and has accused the military and President Abdel Fattah Al-Sisi of misuse of public funds. Ali, who has since moved to Spain, is calling for the departure of Al-Sisi.

This year, from his safe exile in Spain, Ali renewed his call on Egyptians to launch protests between 20 and 25 September to remove the regime. At the time, he had also boasted he would be able to mobilise five million protesters onto the streets of Egypt.

Back in his homeland, Ali has been sentenced, in absentia, to six months in jail on charges of tax evasion.