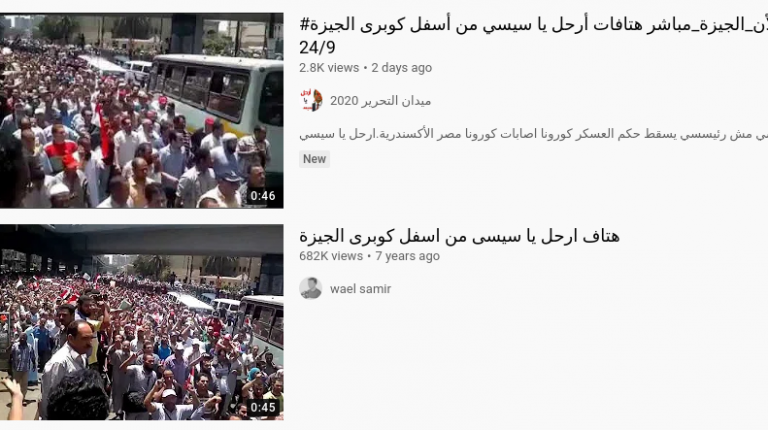 A video that went viral on social media and some TV channels based in Turkey and Qatar-based Al Jazeera, allegedly showing anti-government protests in Egypt, has turned out to be fabricated, according to the AFP news agency.

The video, which showed hundreds of protesters in Egypt holding Egyptian flags and chanting against President Abdel Fattah Al-Sisi, is in fact footage dating from 2013 with the video’s sound inserted, the AFP team added.

It has been shared by multiple users on social media platforms, including Twitter, Facebook and YouTube, and has also been broadcast on pro-Muslim Brotherhood media outlets over the past few days.

Meanwhile, Daily News Egypt has fact-checked some videos that were shared on social media and some Turkey-based media outlets, which have also turned to be either fabricated or featuring old footage from protests that erupted in September.

However, other limited videos circulated on social media showed what appeared to be small night-time demonstrations in some Egyptian villages.

The scattered small-scale protests, which erupted in rural areas, came in response to a call made by Mohamed Ali, the fugitive Egyptian contractor and actor. From his exile in Spain, Ali urged Egyptians to protest on 20 and 25 September against “corruption and the deterioration of economic conditions”.

Earlier on Friday, security sources said that 10 people were arrested for incitement to block the East Cairo’s Autostrad route, according to local media.

Meanwhile, police arrested four others in Luxor for possession of Molotov cocktails, which they were allegedly planning to use to spark riots in the governorate, local media reported.

AP cited an Egyptian security source who said that “the police dispersed a small protest in the village of Shata, Damietta Governorate, and arrested 10 demonstrators”.

Some Egyptian human rights organisations and lawyers have reported that over 100 individuals were arrested and brought to the State Security Prosecution over the past few days.

It was during this time that he issued his first call for Egyptians to protest against alleged corruption.