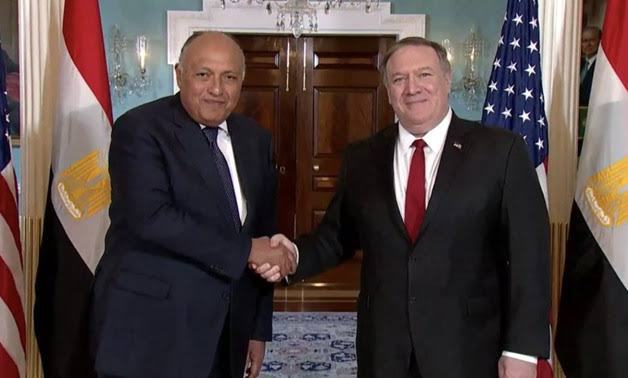 Egypt’s Minister of Foreign Affairs Sameh Shoukry held a virtual meeting with US Secretary of State Mike Pompeo, on Sunday, to discuss the strategic bilateral relations between the two countries.

Egyptian Ministry of Foreign Affairs Spokesperson Ahmed Hafez said that Shoukry and Pompeo exchanged views on a number of regional and international issues of common interest.

The two sides also discussed the endeavours to enhance cooperation in various fields to achieve the aspirations of both countries.

During the meeting, Shoukry and Pompeo asserted the need, in the coming period, for continued coordination and consultation between Egypt and the US on all issues of common interest.

They noted that this was particularly important in light of the challenges and multiple crises that the Arab region continues to face.

The meeting also tackled the latest developments in Libya, and the efforts that have been made to continue the ceasefire process in the country, as well as the developments related to the Palestinian issue.

In August, the warring parties in Libya announced an immediate ceasefire whilst calling for parliamentary and presidential elections to be held next March.

Libya has been beset by violence since the 2011 revolution which saw former leader Muammar Gaddafi deposed by Nato-backed forces.