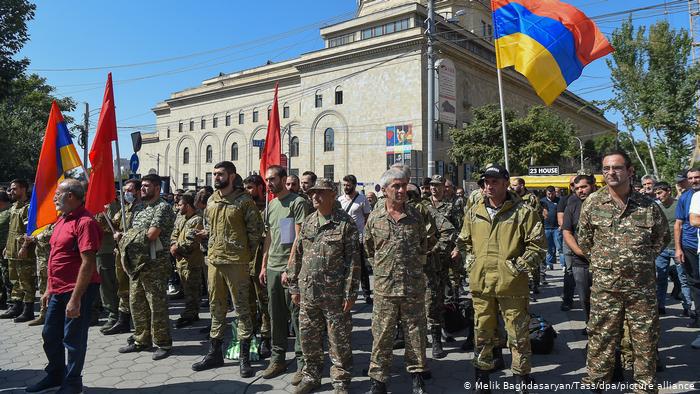 A new round of violence between Armenia and Azerbaijan has erupted, raising concerns over further escalations between the two former Soviet republics.

Dozens were killed in clashes that broke out on Sunday in the disputed Nagorno-Karabakh region, as Armenia and Azerbaijan exchanged accusations against each other relating to who caused the latest bloody confrontations between the two sides.

Armenian Prime Minister Nikol Pashinyan said that “the peaceful population of the Republic of Artsakh and the capital of Stepanakert, as well as its civilian objects, are being bombed. At the moment, there are several victims and wounded citizens.”

Pashinyan also said the Azerbaijani forces were “the enemy [that] attacks the Defence Army in all directions by using artillery, heavy weapons and infantry”.

“(Armenia) will take all necessary measures in political, diplomatic and military fields to ensure the physical security of the Nagorno-Karabakh citizens and to enforce peace,” he added.

A total of 15 Armenian separatist fighters have so far been killed in the latest violence, raising the death toll since the beginning of the confrontations to 39, according to AFP.

Azerbaijan’s Ministry of Foreign Affairs has announced that “six Azeri civilians were killed and 19 others wounded”, although the country has yet to reveal its military losses.

The two former Soviet republics have declared a general mobilisation and martial law in some parts. The latest fighting, which is viewed as the heaviest escalation in recent years, came two months after a previous round of clashes that claimed at least sixteen lives.

The recent flare-up has sparked international and regional reactions calling for an immediate halt to fighting.

Egypt’s Ministry of Foreign Affairs said, on Sunday, that it is closely following the recent updates in the Nagorno-Karabakh region. The ministry urged both parties to exercise maximum restraint and halt the escalation.

The European Union (EU) and France have both called for a halt in the fighting, and for both parties to immediately restart dialogue.

US President Donald Trump said his country will seek to halt the recent fighting between Armenia and Azerbaijan.

After the collapse of the Soviet Union, ethnic Armenians in the disputed region declared their independence from Azerbaijan. However, Azerbaijan still considers the disputed region a part of its territory. The dispute has already resulted in a war that claimed the lives of 30,000 people, and displaced about a million others.

The US and France, under the OSCE Minsk Group, jointly brokered a ceasefire in 1994, although this truce has not succeeded in ending the frequent clashes.

In 2016, bloody clashes erupted in Nagorno-Karabakh, resulting in the killing of dozens of soldiers on both sides.

The clashes between Armenia and Azerbaijan is a matter of international concern, particularly as the South Caucasus is a conduit for pipelines that carry oil and natural gas from the Caspian Sea to global markets. It is noteworthy that Azerbaijan is a major gas and oil exporter in the region.

External interference has also played a major role in this conflict, with Russia lending its support to the Armenians, while Turkey supports Azerbaijan.

On Sunday, Russia’s Ministry of Foreign Affairs called on both sides to agree to an immediate ceasefire, and return to negotiations to restore stability in the region. Russian Foreign Minister Sergei Lavrov also discussed the matter with his Armenian, Azerbaijani and Turkish counterparts.

In earlier statements to Daily News Egypt, Russian Ambassador in Cairo Georgiy Borisenko said that Moscow is “unhappy with this conflict, because we have close ties with both Armenia and Azerbaijan, as they once belonged to the Soviet Union”.

Speaking about last July’s clashes, Borisenko said that “Russia took some diplomatic measures in order to convince both sides to stop these new hostilities”.

He added, “Russia cannot take any position in favour of one of these countries because it is in favour of both of them, and we hope that one day an appropriate solution could be reached for both participants of this conflict.”

Both Armenia and Azerbaijan accuse each other of using mercenaries in the fighting in Nagorno-Karabakh.

Armenia’s Ambassador to Russia said, on Monday, that Turkey “sent about 4,000 Syrian mercenaries to Azerbaijan”, an accusation that Azerbaijan denies.

In turn, Azerbaijan has accused Armenia of “bringing in mercenaries from Syria and the Middle East to fight by its side in the ongoing fighting in the disputed region”.

Turkish Minister of Defence Hulusi Akar called on Armenia to “stop its attacks, withdraw from Azerbaijani territories and return mercenaries they brought from abroad”.

Turkey’s President Recep Tayyip Erdoğan wrote via Twitter, on Sunday, that his country “stands by its Azerbaijani brothers with all its means, as always”. He added that “Armenia once again showed that it is the biggest threat to peace and tranquillity in the region”,

Meanwhile, Armenia’s Ministry of Foreign Affairs said that “Turkey, which annihilated Armenians in their historical homeland and up until now justifies that crime, supports Azerbaijan to carry out the same genocidal acts in the South Caucasus. This genocidal Turkish-Azerbaijani alliance is a serious threat to the region.”