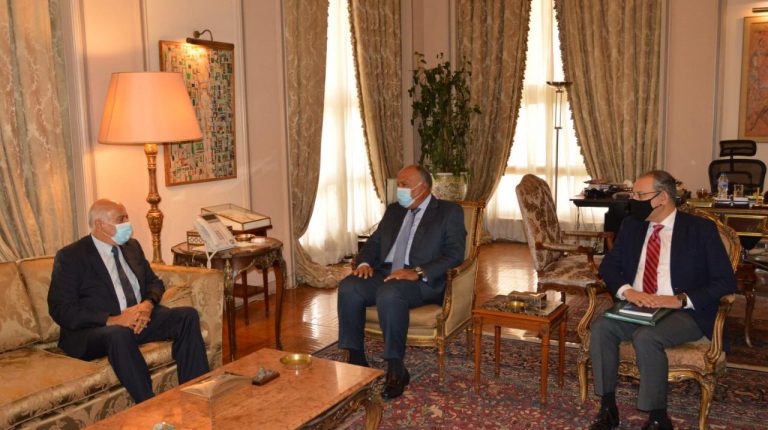 Egypt’s Minister of Foreign Affairs Sameh Shoukry has met with Fatah representatives to discuss the latest updates relating to the Palestinian cause.

During the meeting in Cairo on Sunday, Shoukry affirmed Egypt’s continued support for the rights of the Palestinian people and the Palestinian Cause. He added that Egypt aims to establish the independent State of Palestine according to 1967 borders.

The minister also renewed Egypt’s call that East Jerusalem be made capital of the Palestinian state, in accordance with the international legitimacy. He further noted that Egypt supports all efforts that aim to achieve stability, peace and security in the region.

Rajoub briefed Shoukry on the latest updates regarding the Palestinian issue and their vision for future events. He also informed the Egyptian minister of the outcomes of efforts for achieving reconciliation between the Palestinian factions to reunify the Palestinian people.

Last week, the two major Palestinian movements, Fatah and Hamas, concluded their talks in Istanbul, Turkey. They announced that they had agreed on a vision related to ending the division. This vision will soon be presented in a comprehensive national dialogue.

The two Fatah members’ visit to Cairo comes at a critical time for the Palestinian Cause, following the announcement by the UAE and Bahrain that they would be normalising ties with Tel Aviv. The Gulf States have undertaken the normalisation, despite neither of them ever having engaged in warfar with Israel.

The UAE and Bahrain signed an agreement with Israel under the sponsorship of US President Donald Trump, who said that other Arab countries are on the road to join the four Arab states who have proclaimed ties with Israel. Egypt and Jordan have already signed peace treaties with Tel Aviv decades ago following the 1973 war.

On Friday, Palestinian Authority President Mahmoud Abbas called upon the United Nations (UN) to organise an international conference to launch a “real” peace process between the Palestinians and the Israelis. He stressed that the Palestine Liberation Organization (PLO) did not mandate any party to speak on behalf of the Palestinian people.

Abbas’s call came just a few days after Palestinian Foreign Minister Riyad Al-Maliki announced that Palestine would be giving up the Arab League Council presidency for the current session. Al-Maliki said that the action is in protest at the Arab League’s not having condemned the UAE and Bahrain’s normalised relations with Israel.

All passengers and crew freed from hijacked plane in Malta