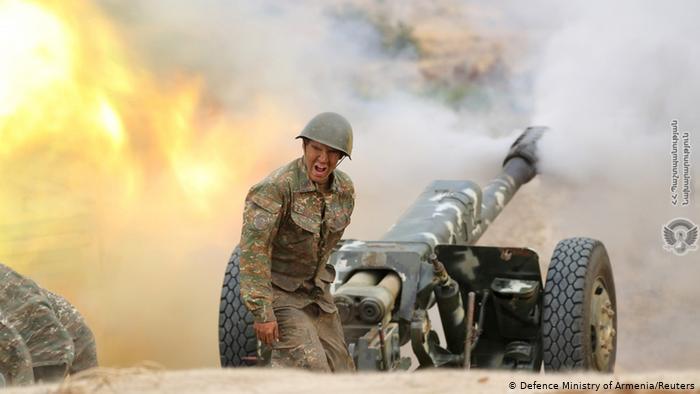 The request follows Azerbaijan’s attacks launched on its border with Armenia and on the line of contact with Nagorno-Karabakh, according to Armenian news agencies.

The Armenian president requested that President Al-Sisi use his contacts and reputation in the international arena to encourage the end of bloodshed and human suffering in the hostilities “as soon as possible”.

“It is with pain and great discontent that I must inform you that Azerbaijan has launched another offensive against the Republic of Artsakh (Nagorno-Karabakh), which is also targeting civilians,” Sarkissian wrote, “As I am writing this letter, dozens of civilians and soldiers of both sides have already been either killed or wounded.”

Fighting between Azerbaijan and Armenian forces entered its fourth day, on Wednesday, in the biggest escalation of the two sides’ decades-old conflict since a 1994 ceasefire.

Both Azerbaijan and the ethnic Armenian enclave of Nagorno-Karabakh have claimed that the other side has luanched attacks along the line of contact that divides them. Sarkissian emphasised that in previous months, the Azerbaijani leadership had always stated its intention to resolve the conflict through war.

“The conflict can and must be resolved only through negotiations,” Sarkissian added in the letter, “The conflict does not have a military solution. We have proved this in the past and will prove it again.”

Dozens have been reported killed and hundreds wounded in fighting that began on Sunday, and which has spread far beyond the enclave’s borders.

Both Armenia and Azerbaijan have rejected international calls for negotiations and a halt to the fighting.

Armenia’s Prime Minister Nikol Pashinyan said, on Wednesday, that talks with Azerbaijan were not yet on the table.

“It is not very appropriate to speak of a summit between Armenia, Azerbaijan and Russia at a time of intensive hostilities,” Pashinyan said, adding, “A suitable atmosphere and conditions are needed for negotiations.”

Nagorno-Karabakh is a breakaway region inside Azerbaijan run by ethnic Armenians. However, the region is not internationally recognised as an independent republic. Fears are on the rise that the situation could prompt intervention from regional powers such as Turkey and Russia.

On Monday, Turkish President Recep Tayyip Erdogan said that Azerbaijan must take matters into its own hands, and that Turkey would stand by it “with all its resources and heart”.

On Tuesday, Ankara said it was “fully ready” to help Azerbaijan recover Nagorno-Karabakh.

Early this month, Armenia’s Minister of Foreign Affairs, Zohrab Mnatsakanyan, said that his country “values Egypt’s role in bringing peace to the region, especially in Libya”.

During a press conference earlier this month with Egypt’s Minister of Foreign Affairs Sameh Shoukry, Mnatsakanyan added that Turkey has taken a unilateral and aggressive approach against the Armenian people. He noted that this could be seen in the recent Turkish actions in the region.

“We see that Turkey is trying to encourage a military escalation, and they are transferring mercenaries to Azerbaijan, which threatens the existence of any peaceful solution, because it is a force imposed that destabilises stability and security,” Mnatsakanyan added.

The Armenian minister also said that any attempt to destabilise the region, especially through the transfer of terrorists to some areas, is completely unacceptable.