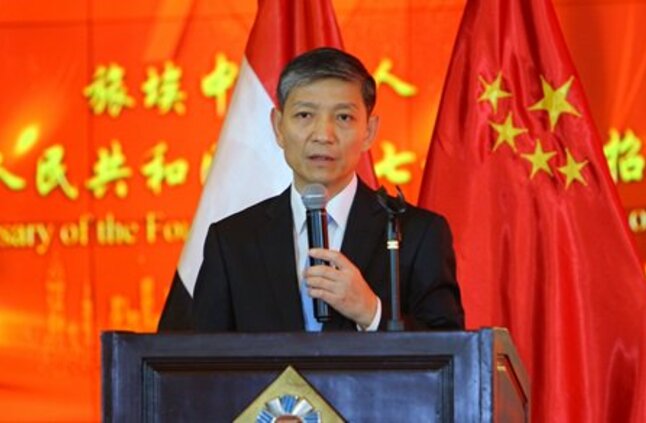 The Chinese Ambassador to Egypt Liao Liqiang hosted a reception via videoconference, on Monday, on the occasion of the 71st Anniversary of the founding of the People’s Republic of China.

During the National Day Reception, Liqiang expressed the embassy’s highest respect and sincere gratitude for Egypt’s support during the novel coronavirus (COVID-19) pandemic.

“Many people have expressed sincere greetings and provided valuable support in various ways,” Liqiang added, “We are grateful to the Egyptian and Chinese disease control and medical staff who have been at the forefront of prevention and control, racing against time, fighting against the virus, providing remote medical services, ensuring the PCR test mechanisms.”

He added, “This period has also demonstrated the kindness and boundless love of Egypt, illustrated by its efforts to protect the lives and health of the Egyptian and Chinese peoples.”

Liqiang noted that the year 2021 marks the 65th anniversary of the establishment of diplomatic relations between China and Egypt.

“Let us wish the two great countries continued prosperity and stability, good happiness and prosperity for the two friendly peoples, and more progress for the distinguished Chinese-Egyptian relations,” he added.

The Ambassador pointed out that Beijing appreciates Egyptian President Abdel Fattah Al-Sisi’s work during the coronavirus outbreak, particularly as he instructed Minister of Health Hala Zayed to send shipments of medical supplies to China.

Liqiang said that the Chinese government has also sent four shipments of medical supplies to Egypt, to help the latter in its preventative measures against the virus.

He added that the two countries are partners in confronting the coronavirus, referring to the six webinars which were held between health experts from Egypt and China. During these webinars, the experts exchanged expertise on producing vaccines used in treating coronavirus patients.

Joint Chinese-Egyptian cooperation in developing a vaccine against the coronavirus has also been steadily progressing. The Chinese National Health Committee and Egypt’s Ministry of Health will sign a letter of intent regarding this cooperation.

China will fulfil its earnest commitment that the vaccines it is developing will be distributed as a public benefit once they are completed and ready. The country has also said that Africa, including Egypt, will be among the first to benefit from this.

He said that Chinese companies operating in Egypt have made substantial progress in a number of important projects in Egypt as part of the Belt and Road Initiative. This includes work on the Central Business District project in the New Administrative Capital (NAC), and electrified train project in 10th of Ramadan city.

During the reception, the ambassador noted his country’s gratitude to the Egyptian people, teachers and students in Egypt, as well as its citizens overseas. He said that Egypt has leant a helping hand and volunteered donations, including medical materials, to China.

“We are grateful to the Chinese companies and the Chinese Chamber of Commerce in Egypt,” Liqiang said, “You [Egypt] have taken active efforts in epidemic prevention and control, donated materials to both sides, promoted the resumption of work and production in an orderly manner, cared and protected Egyptian and Chinese employees, and ensured the construction of national projects. You have also worked hard and performed well.”

He also pointed to cultural artists from both countries, who have co-organised various cultural exchange activities, including online performances, exhibitions, and lectures. During the epidemic, these artists have actively maintained the momentum of cultural exchanges, whilst bringing the hearts of the Chinese and Egyptian people closer to each other through culture.

“We believe firmly that with joint efforts, we will achieve new progress in bilateral cooperation to combat the COVID-19 pandemic, and eventually defeat it,” Liqiang said.

He announced that China has achieved remarkable results as part of a parallel push to accelerate the prevention and control of the coronavirus, and to urgently promote economic and social development.

Since the second quarter (Q2) of 2020, the Chinese economy has returned to a position of economic growth, making China the first country in the world to resume such growth, according to the ambassador.

“Through the pandemic, we realised that reform is the main driving force for national development, and high-level openness to the outside world is a strategic option to create the country’s new advantages in international cooperation and competition,” Liqiang said, “The strong national strength accumulated by China’s implementation of the reform and opening-up policy provides us with confidence in our ability to prevail over the pandemic.”

He said that both China is keen to work with Egypt and other countries in order to properly deal with a range of topics of mutual significance. These include regional conflicts, terrorism, climate change, cyber security, bio-security, and other global challenges. The cooperation would take place in a way that serves the common interests of all peoples of the world and build a better future for mankind.