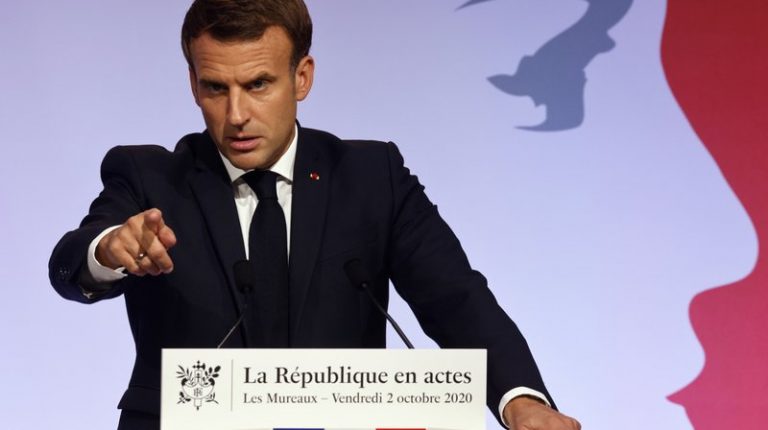 The Al Azhar Islamic Research Academy (AIRA) denounced, on Saturday, recent statements made by French President Emmanuel Macron in which he accused Islam of separatism.

In a statement on Friday, President Emmanuel Macron announced that France will later this year unveil a proposed law to fight “Islamist separatism”. The move has been strongly condemned by the Sunni institution, Al-Azhar, which has accused Western officials of consistently alluding to the term Islamic terrorism.

The law aims to fight what the French President identified as the favouring of religious laws over France’s republican, secular values, a stance he calls “separatism”.

The AIRA asserted that such accusations have nothing to do with the true nature of Islam, whose Sharia calls for tolerance and peace among all human beings.

The council added that Macron’s statements undermine the joint efforts among religious figures to eliminate racism and bullying against religions. It noted that such racist statements would inflame the feelings of about 2 billion Muslims worldwide.

The council also emphasised that continued accusations that equate Islam with separatism and isolationism is flawed. It noted that it confuses between the reality of a religion, which calls for rapprochement between humans, and the exploitation of the religion to achieve unworthy purposes.

It called for an end to attacks on religions which support hate speech, in order to reach peaceful coexistence between humans, whilst eliminating discrimination and racism.

In Friday’s statement, Macron described Islam as “a religion that is today in crisis all over the world,” before focusing on the battle against Islamic radicalism in France.

He said Islam was in crisis due to “an extreme hardening” of positions. The French Government is set to present a draft law in December, aimed at strengthening secularism in France against what he described as “Islamist separatism” in the country.

“Islam in France must be freed from foreign influence,” he added, promising improved oversight of the financing of mosques.

Macron asserted that the proposed law endeavours to ensure that public life in France reflects the state’s secularism, including maintaining the separateness of church and state and mandating France’s neutrality on religion.

He further said that secularism is the cement of a united France, adding “let us not fall into the trap laid by extremists, who aim to stigmatise all Muslims”.

Last Thursday, Grand Imam of Al Azhar Ahmad Al-Tayeb said that the term Islamic terrorism reflects a shameful ignorance of the religion’s graceful Sharia and its laws. He added that it also deflects attention away from the principles that invoke human rights, freedoms, and mutual respect.

Al-Tayeb said that “attaching the crime of terrorism to Islam or any other divine religion is a defective confusion between the truth of religions that came down for the happiness of mankind, and using them for low purposes at the hands of a minority”.

He has also urged Western officials to refrain from using “misleading terms” that only increase hatred and radicalisation. He noted that these terms defame the principles of peaceful religions that call against violence and promote coexistence.

“Those who insist on using this hateful term are not aware they are reducing opportunities for fruitful dialogue between the East and West and increasing hate speech among societies,” he added.

Last week, an 18-year-old man from Pakistan stabbed two people with a meat cleaver near the former offices of controversial publication, Charlie Hebdo. The attacker had previously expressed anger over its publication of caricatures of the Prophet Muhammad.

Following the attack, France’s Minister of Interior Gerald Darmanin said that the Paris knife attack clearly reflected an act of Islamist terrorism. He asserted that France “is still at war with Islamist terrorism”.