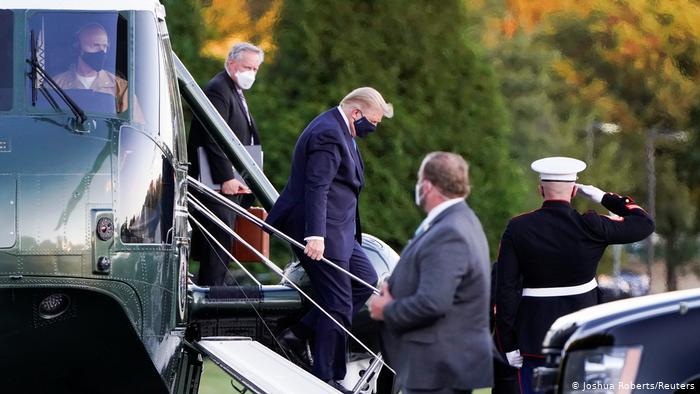 US President Donald Trump tried to allay supporters’ concerns about his health, on Saturday evening, by releasing a four-minute video saying that he felt much better following treatment.

President Trump confirmed, on Friday, that both he and First Lady Melania had tested positive for the novel coronavirus (COVID-19).

In Saturday’s video, posted on his official Twitter account, the US President said, ”Doctors at the Walter Reed Medical Center were working hard to get me all the way back.”

He added that his wife Melania was “really handling it very nicely,” after her own diagnosis with the virus.

The video came after a day of mixed messages from official channels about the president’s health, as well as confusion about when exactly he had been diagnosed with the virus.

On Saturday morning, the president’s physician Sean Conley told the press outside the Walter Reed military hospital that the 74-year-old’s symptoms had abated, and his fever had gone down. He also said that the president was not being given extra oxygen.

Conley refused, however, to say whether the president had ever needed supplementary oxygen, despite repeated questioning, and declined to say how high a fever Trump had been running before it’s return to a normal range.

His optimistic account was contradicted within minutes by a press pool reporter, who passed on a statement from White House Chief-of-Staff, Mark Meadows.

Meadows’ statement said that Trump’s “vitals over the last 24 hours were very concerning and the next 48 hours will be critical in terms of his care”.

He added, “We’re still not on a clear path yet to a full recovery.”

There had been numerous reports that Trump had been given oxygen at the White House, before the decision was made to move him for hospital treatment.

The mixed messages were not helped by a further statement from Conley during his press briefing, in which he said that Trump had begun exhibiting “clinical indications” on Thursday afternoon, earlier than previously known.

Conley noted that the US President was 72 hours into his diagnosis, which would have meant that Trump had been carrying out his regular duties for more than 24 hours before publicly revealing his test result.

The White House press team quickly clarified that Conley had misspoken, and had meant to say “day three”, since he had tested positive on Thursday evening.