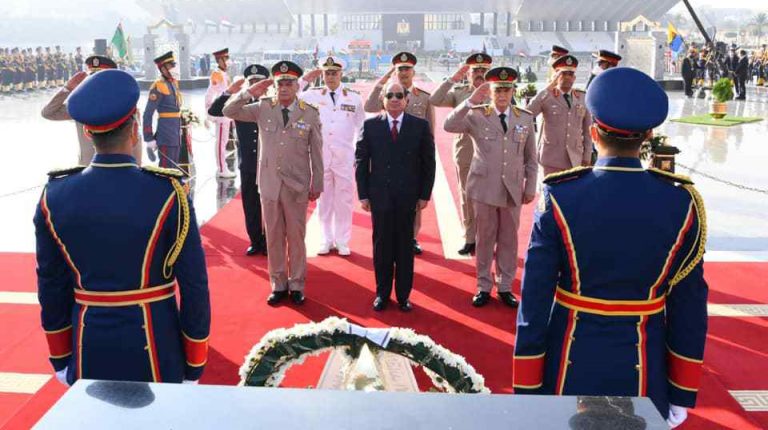 Egypt’s President Abdel Fattah Al-Sisi, on Monday, chaired a Supreme Council of the Armed Forces meeting to discuss the military efforts to protect Egypt’s national security on all strategic fronts.

The meeting discussed counterterrorism efforts in cooperation with other state institutions, according to a presidency statement.

During the meeting, Al-Sisi congratulated military commanders, officers, and the Egyptian people, on the occasion of the 6 October War when Egypt defeated Israel in 1973.

Meanwhile, Al-Sisi laid wreaths of flowers at the tombs of late Presidents Gamal Abdel Nasser and Anwar Sadat, as well as for martyrs of the Armed Forces, during a ceremony which was attended by top military commanders and officials. The ceremony was also attended by Prime Minister Mostafa Madbouly, Grand Imam of Al Azhar Ahmed El-Tayyeb, and Pope Tawadros II of Alexandria, as military music and Egypt’s national anthem were being played.

The date is one of Egypt’s most significant annual events, as the country celebrates its victory over Israel and the crossing of the Suez Canal. The date was declared a national holiday for citizens to commemorate the victory, and to pay tribute to the martyrs among the country’s military personnel.

This year, the Ministry of Manpower announced Thursday 8 October as a national holiday instead of Tuesday 6 October, in line with a former cabinet decree that allows replacing national holidays and official events when they fall in the middle of the week with other days at the beginning or end of the week.