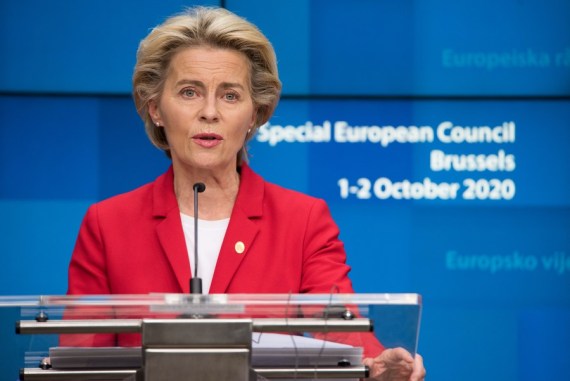 European Commission President Ursula von der Leyen has said she is self-isolating after having contact with a person who tested positive for COVID-19.

“I’ve been informed that I participated in a meeting last Tuesday attended by a person who yesterday tested positive for COVID-19,” von der Leyen said in a message on Twitter on Monday morning. The test the chief executive of the European Union went through Thursday showed negative results. She would retest on Monday and is to remain in self-isolation until at least Tuesday.

People who have been in high-risk contact with infected patients must remain at home for seven days, starting from when they have contact with the infected person, according to containment measures in Belgium, where the commission is located.
High-risk contacts refer to contact longer than 15 minutes in an enclosed space and with less than 1.5 meters of distance.

On Sept. 29, von der Leyen was in Lisbon, Portugal meeting officials including Portuguese Prime Minister Antonio Costa. She gave a speech at the Champalimaud Foundation and attended the Council of State.