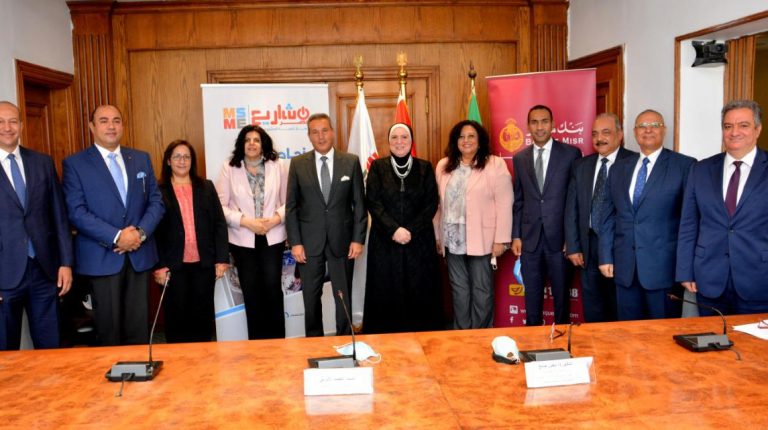 The Micro, Small and Medium Enterprises Development Agency (MSMEDA) and Banque Misr have signed a microfinance contract of EGP 500m to support micro-projects across Egypt.

The contract was signed by Minister of Trade and Industry and MSMEDA Executive Director Nevine Gamea and Banque Misr Chairperson Mohamed El Etreby.

It comes as part of the World Bank agreement entitled “Stimulating Entrepreneurship to Create Jobs”.

Gamea said the contract comes in accordance with the Egyptian government’s directives that MSMEDA coordinates with various development partners to support micro-projects in Egypt.

It will support the Central Bank of Egypt (CBE) and Egyptian Federation for Microfinance initiative to expand the provision of funding to NGOs and micro companies. This aims to help them provide their financial services to the largest number of citizens.

Gamea pointed out that the agency’s activities and its various plans take into account the particular focus on women and youth to ensure they are economically empowered.

The percentage of projects allocated to women in this contract stands at about 30% of the total funding. About 10% is directed to women over the age of 35, and 30% to youth aged between 21-35 years old.

The minister indicated that EGP 50,000 will be granted per loan, and that about 33,000 micro-projects will be funded during the project’s implementation across the country.

She praised the cooperation in the microfinance field between MSMEDA and Banque Misr, which began in 2011. The total number of contracts that the two sides have signed currently stands at about EGP 1.3bn, through which 205,000 micro-projects received EGP 2.5bn through the bank’s branches.

Mohamed El Etreby said that Banque Misr attaches great importance to the small, medium, and micro enterprises sector, by providing all financial and non-financial services to meet the needs of this sector’s clients.

He explained that Banque Misr is one of the first banks that adhered to the requirements of CBE and reached 20% of the bank’s credit portfolio, with its positive impact on the national economy, indicating that this coincides with the directives of CBE and the state’s efforts to advance in this sector, to improve economic indicators, increase economic development rates, encourage local products, and reduce the import bill.

MSMEDA to take part in BiznEX on 9-10 December