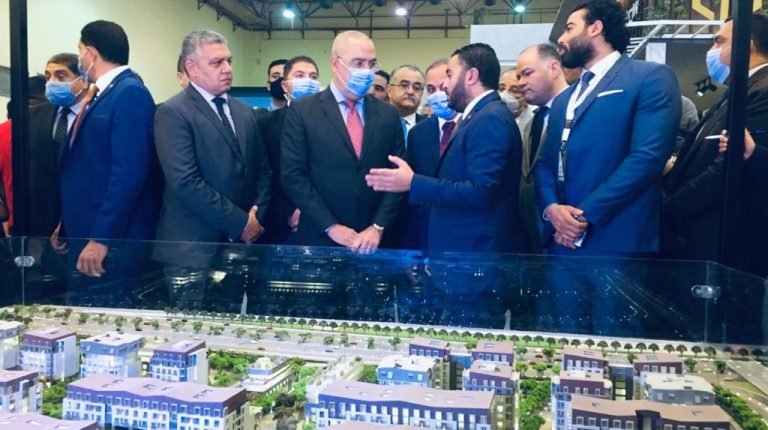 The exhibition provided companies with the platform to attract a large base of customers, particularly following the almost total halt of sales in the past six months due to the pandemic.

Aqari is the first physical exhibition in the COVID-19 period, with several exhibitions that were to take place in the previous few months having turned to an virtual presence as part of precautionary measures.

“We seek to push the real estate market forward, and as a result we are providing a lot of incentives for this vital sector to facilitate the developers, including mortgage finance support, through which a very large segment of companies can be covered,” said El Gazzar. “There has also been the implementation of many roads and the facilitation of the companies’ access to lands.”

He added, “Currently, planning is underway to begin the implementation of the second phase of the New Administrative Capital (NAC), the first phase of which will be opened on 30 June 2021, with the second phase set to provide great opportunities for investors.”

The minister noted that the great volume of urban development being undertaken in parallel with the projects, are being constructed by real estate developers, which will lead to a great diversity in offered projects.

Mohamed Mounir, Vice Chairperson of Master Group, said that his company has always been keen to provide various exclusive offers to its customers on its projects in the NAC and Ain Sokhna. These include up to 50% on cash payment and discounts for payment plans of over 7 years without interest, in addition to other offers which were presented to exhibition visitors.

The City compound, which Master Group is developing in the NAC’s R7 district, will be constructed over four phases on an area of 54 feddan. The compound is set to comprise of about 2,187 housing units.

Additionally, Master Group is developing the Ibiza Chillout Sokhna project in Ain Sokhna, on an area of ​​28 feddan, overlooking the sea. It boasts a facade of up to 300 sqm directly facing the sea, and extends back for a depth of 450 sqm.

Moreover, El Attal Holding provided exhibition visitors with a package of offers for the new phase in its Park Lane Compoundhood, entitled “Serenity Lane”. These offers included a payment period of up to 10 years and discounts of 10% and 10% down-payment of the unit’s value.

The company also provided other additional offers for customers during the exhibition, according to the company’s Vice Chairperson, Mohamed El Attal. He added that the past three months have seen great demand from customers looking to buy.

“We achieved a percentage of sales that exceeded the target in this period,” El Attal said, “I believe that the company’s sales will register EGP 1.3bn by the end of 2020, especially with the return of real estate exhibitions which coincide with the company’s launch of its new tourism project in Red Sea area.”

Park Lane Compoundhood spans over 26 feddan in the NAC’s R7 district, close to the Swedish and British universities, as well as the diplomatic district.

During its participation at the exhibition, New Jersey Developments announced the launch of its latest project, the ​​9,000 sqm Soul Plaza, the first commercial mall on the NAC’s tourist walkway.

During the exhibition period, Chairperson Gerges Youssef announced the launch of the second phase of Jura El Galala project in Ain Sokhna.

He noted that the company offered new and distinctive offers during the exhibition, including a 10% discount for purchases made during the exhibition period. Customers could also make payments of a 30% down payment and the first instalment upon delivery, with an annual investment return of 12% for customers.

Arqa Developments also participated in the Aqari Exhibition, with its latest development entitled “I Business Park New Capital”. The project is mixed-use, comprising of three towers including administrative, commercial, medical units, as well as serviced-apartments.

Arqa Developments CEO and Managing Director, Mahmoud Helmy, said that the company provided its clients with a 5% discount on medical units in Tower C, and Tower B for offices.

He added that the company also offered its clients a gift of an Apple MacBook Air laptop for buying an office or medical unit during the four-day exhibition.

Moreover, the company offers its clients a 3% discount on other office and administrative units, as well as gold for buying a commercial unit.