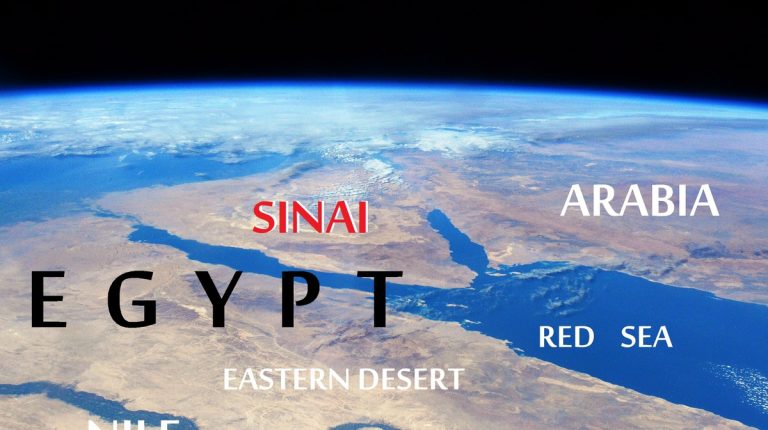 Henry Field’s trip to Egypt in 1883 resulted in the written account that was published under the title On the Desert: With a Brief Review of Recent Events in Egypt.

The American traveller’s diary of his trip represents one of the lesser-known voyages that took the events of the Bible, and more specifically the Exodus, as its base, despite the richness of its valuable historical and geographical information.

This voyage derives its uniqueness from the fact that Field was an eyewitness to a critical juncture in Egypt’s politics during the last two decades of the 19th Century. He visited Egypt in the aftermath of a dramatic change followed by the failure of the national movement led by Ahmed Orabi, and the consequences of British occupation.

Field offered useful remarks about Cairo’s urban structure, and drew a good description of the Cairo-Suez Road. In fact, the Sinai Peninsula is the main aim of his voyage, especially its physical landscapes, natural environment, and Bedouin inhabitants.

This voyage can be classified in the traditional category of Bible-oriented trips, which are thought to have started at the end of the 4th Century CE. Most of his voyage provides a real contribution to our knowledge of Egypt’s historical geography, whilst other aspects of it are fitted with the taking-for-granted, stereotyped views common of his era.

Field’s contributions to the geography of Sinai are accomplished by merging the past with the present, comparing the Egyptian environment with those found in Latin America, India, and some parts of Europe.

Before travelling to Sinai, Field analysed the political turmoil in Egypt following the rise of the national movement, led by the army, against the then Khedive Tewfik Pasha. After terming the political consequences of Orabi’s nationalist movement as “anarchy”, Field launched an attack against what he called the “catastrophic movement” of nationalist Egyptians who were “uncivilised and cannot understand the Western way of peaceful political change.”

In Field’s point of view, Orabi’s fanaticism could be attributed to the standard of education available at Cairo’s Al-Azhar University, which for the American traveller was the very centre and focus of Muslim fanaticism. It was whilst studying at that university, Field claims, that Orabi was known among his peers as a religious and devout Muslim.

On the other hand, Field praises the great legacy of Khedive Ismael, whom he considered a man of history, comparing him with Louis XIV of France. The route to Mount Sinai

Field’s interest in Egypt’s politics was, however, just a sideshow to his voyage to Sinai. He started his journey by writing a contract with a dragoman (translator), who was responsible also for securing food, tents, and camels. The camels and tents were sent to Suez four days before he, himself, left Cairo by train.

The railroad at that time took a route from Cairo to the Delta town of Zagazig, parallel to the Sweet Water Canal. Field furnishes his journey by recalling some events from the Bible, especially relating to what was known as “the Land of Goshen”. It is thought that this area was inhabited by Jacob and his sons following their journey into the fertile land of Egypt, and from which, some centuries later, Moses led the Exodus of the Israelites.

Near Gebel Attaka, he traversed the Gulf of Suez reaching, on the other side, the Wells of Mousa, also called Ayoun Mousa or Moses’ Springs.

From Moses’ Springs, Field traversed southward to reach an “imagined” geography of the route the Israelites are thought to have taken, particularly at Marah, the spring whose very name in Arabic tells of its bitterness. Although legend has it that Moses himself sweetened the water there, Field was disappointed to find that the spring indeed had almost dried up.

However, he found another sacred geographical site at a larger spring, or group of springs, at Wadi  Ghurundel, which he delineated to be the “Elim” (site of the mass camp during the Exodus).

For Jews, Mount Serbal represents one of the most important and sacred places in the Sinai Peninsula, as it’s the supposed location where Jewish law was received. Looking down from the summit of Mount Serbal‎, Field compared the surrounding environment with the natural geography of Switzerland.

Only, instead of the green fields, waving forests, and crystal lakes in the Alps, we see here the barrenness of utter desolation with the whole Sinai Peninsula likened to a sea of mountains in which peak upon peak are tossed up like waves.

Filed sees in Serbal a central religious point, from which he recalls the whole story of the Jewish people suggesting that it is Mount Serbal, rather than Mount Sinai, where Moses received the Law from God.

In his travels from Sinai to Palestine, Nukhul was an important station in Field’s itinerary. As a central station on the road to Mecca, Field gives a detailed description of the caravans moving to and from.

Criticising the road of Muslim pilgrimage, Field went on to consider the pilgrimage road as the “royal road of death” for more than 1,000 years. He also took the view that Mecca was the very “nest and breeding-place of those diseases” (the cholera and the plague) which moved from Asia to Western Europe. 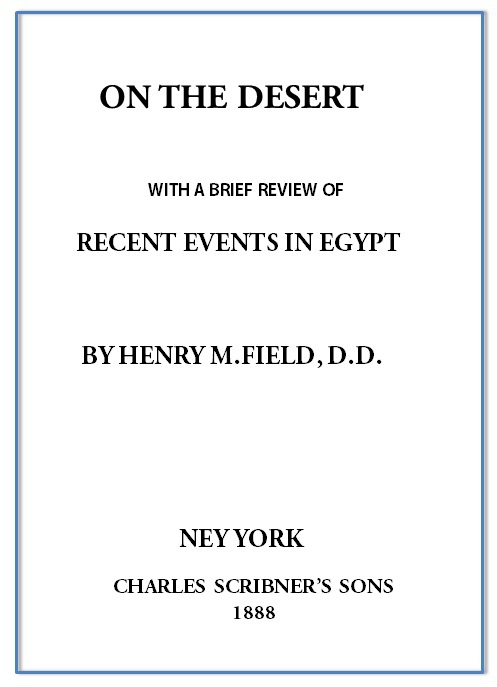 Who were the Bedouin?

Throughout the lengthy description of his voyage, Field presents to his Western readers many judgments concerning the people of Sinai, the most important of which are:

– The Bedouins are people who are nothing more than children, and must be treated like children, not like full-grown men. It is useless to present to them formal propositions or arguments. The word that works most effectively and resonates with the Bedouin is “backsheesh” (tip).

– The relationship between the Bedouin and the government is a very suspicious one. The Bedouin usually complains that the government pays nothing for the protection the former give to the pilgrims, who camp at Nukhul on their way to Mecca.

– The Arab makes a fine distinction between stealing and robbing. A thief is one who creeps around behind your back or into your tent and rifles through your pockets, a practice to which the low, base-born Fellah might stoop, but which the proud Bedouin would scorn. He is a lofty, high-minded robber, who meets you in the desert face-to-face, and if he attacks you, gives you the opportunity to defend yourself. If he despoils you, it is by a right which is recognised in all nations, the right of the strongest. He takes your goods, but he takes them in an open and honourable battle.

Henry Field’s voyage to Egypt and Palestine has many features and descriptions about the sacred geography of Sinai in common with other traveller diaries mentioned in Part 1 in this series. Fixing the geography of the Exodus is rather a difficult mission, if not impossible, since there are numerous theories concerning the track of Moses and his people.

It is noticeable that the modern maps of Egypt that feature the Sinai Peninsula were produced by the British occupation throughout late 19th and early 20th Centuries. The post-colonial maps just reproduced these maps whilst adapting the colonial terms and names, most of which have been trapped in the imagined geography of the Bible.

Even the very name of Mount Sinai or Jabal Musa is controversial, with scholars unable to reach consensus on its actual location. Some scholars claim that the Mount Sinai of the Bible is the modern-day Jebel Sufsafa and Mount Catherine, while others, disagreeing with this view, and believe Mount Sinai is Mount Serbal and Jebel Banat not far from the Gulf of Suez.

Moreover, some scholars claim that Mount Sinai is actually located in the north-eastern area of the peninsula, in the region of Ein Qudeirat. Scholars making this argument identify it as Jebel Hallal, Jebel ‘A raif-e-Naga, Mount Yelleg, or Maghara.

Some views even locate Mount Sinai outside Sinai itself, placing it instead in Edom, or Mount Baggir on the northern border of Midian, located in the north western part of modern-day Saudi Arabia. Yet others, still, go as far as to locate it in Se’ib al Harob in the heart of Midian.

Lastly, the Biblical school of research connecting place names with sacred geography is a very problematic issue, causing much confusion in both travel literature and the “historiography” of the proper geographical solid-facts science.