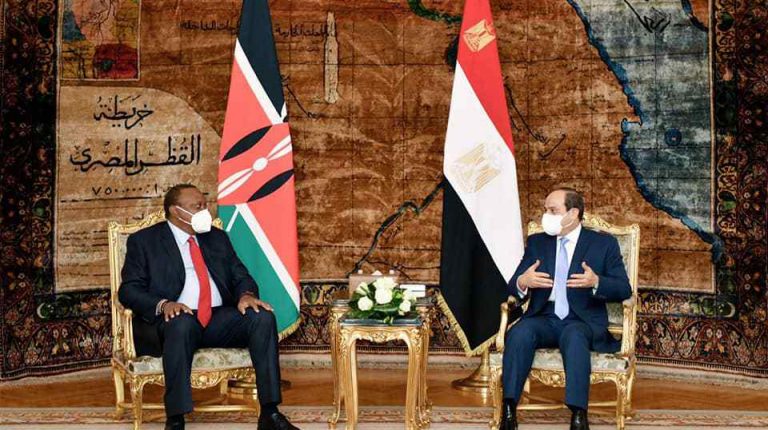 Water security is of the utmost importance for the Egyptian people as it is a matter of national security, according to Egypt’s President Abdel Fattah Al-Sisi.

The Egyptian president’s remarks came during a meeting with his Kenyan counterpart Uhuru Kenyatta on Sunday evening.

The meeting between the two leaders discussed the latest regional developments and issues of mutual interest, particularly with regard to the Ethiopian Dam. The meeting was held in Cairo, in the presence of Egypt’s Minister of Foreign Affairs Sameh Shoukry and Head of the General Intelligence Service (GIS) Abbas Kamel.

Al-Sisi said that Egypt aims to protect its water rights by reaching a legally binding agreement with Ethiopia that guarantees clear rules for the filling and operating of the Grand Ethiopian Renaissance Dam (GERD).

The agreement would also achieve the common interests of all parties, with a further agreement made to intensify coordination between Egypt and Kenya on this vital issue during the coming period.

The Egyptian president also made note of the joint cooperation and unity of visions between the two countries, stressing Egypt’s keenness to strengthen relations and consolidate strategic cooperation with Kenya in various fields.

Al-Sisi also congratulated President Kenyatta for the latter’s election to a non-permanent seat on the UN Security Council for 2021-2022. Al-Sisi expressed his confidence in Kenya’s ability to fully represent Africa as a voice defending the continent’s issues at the UN.

Regarding bilateral relations, Al-Sisi stressed Egypt’s keenness to provide Kenya with development expertise relating to major national projects. The expertise would focus particularly on infrastructure, housing, utilities and roads, through specialised Egyptian companies that have acquired extensive experience and expertise in this field.

For his part, President Kenyatta expressed his country’s great appreciation for its extended historical relations with Egypt, stressing Kenya’s keenness to develop cooperation between the two sides.

The Kenyan president also praised Egypt’s pivotal regional role in terms of maintaining peace and security, particularly in the Horn of Africa and East Africa. These were reflected in the recent and significant Egyptian support for resolving the outstanding issues in this context.