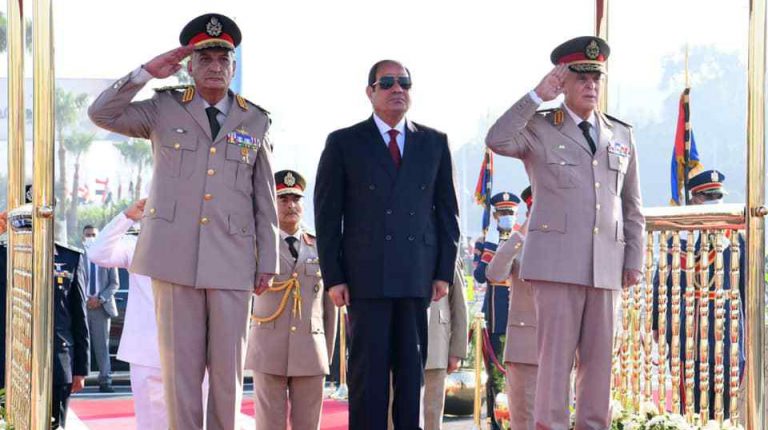 Egypt’s President Abdel Fattah Al-Sisi said, on Tuesday, that wicked designs and threats against Egypt will never stop and will never decrease, even if their nature changes.

In a televised speech marking the 47th anniversary of the 6 October War, Al-Sisi said that Egypt’s achievements over the years to maintain security and stability have been remarkable, and are well known around the world.

Al-Sisi added that maintaining the security of a large country such as Egypt, particularly as it lies in a difficult region and unstable world, is evidence of the Egyptian people’s uniqueness and solidity. He also said that it reflected the ability of the armed forces and state institutions to undertake such a mission.

The President said that the 6 of October War was not only a military battle for Egypt in which it achieved its greatest victory, it was also a real test of the Egyptian people’s ability to turn a dream into reality.

During his speech, Al-Sisi paid tribute to both late President Anwar Sadat, and to all mothers who instilled in their children a firm belief that their territories could not be compromised. He also paid tribute to martyrs who sacrificed their lives for country, and to the armed forces and police personnel who are still carrying out their work to protect the security and stability of Egypt.

Earlier on Monday, Al-Sisi chaired a Supreme Council of the Armed Forces (SCAF) meeting to discuss the military efforts to protect Egypt’s national security on all strategic fronts. The efforts also take into account counterterrorism efforts, as the country remains on high alert to combat external threats and dangers.

Also on Monday, the President laid wreaths of flowers at the tombs of late Presidents Gamal Abdel Nasser and Anwar Sadat, as well as for Armed Forces martyrs, during a ceremony held to commemorate the 6 of October War.

The date is one of Egypt’s most significant annual events, as the country celebrates its victory over Israel and the crossing of the Suez Canal. The date was declared a national holiday for citizens to commemorate the victory and to pay tribute to the martyrs among the country’s military personnel.