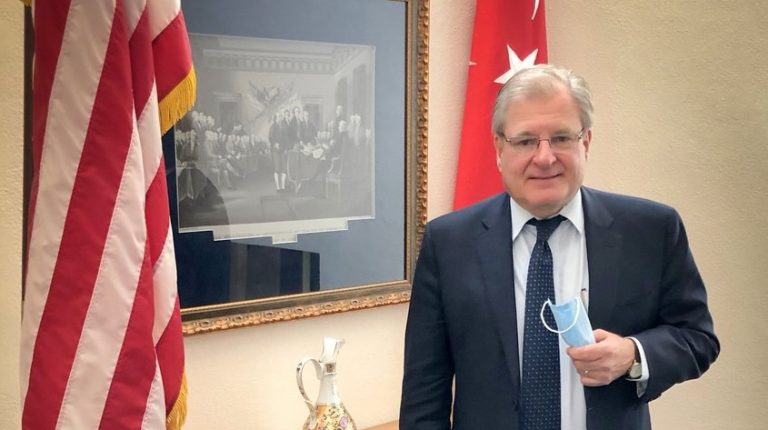 The US Ambassador in Libya Richard B. Norland headed, on Thursday, to the Turkish capital, Ankara, for talks on resolving the Libyan crisis.

“I’m continuing my travels in Ankara for consultations with Turkey on how best to support de-escalation and the Libyan Political Dialogue in a constructive way, that returns full sovereignty to Libya,” the Ambassador said on Twitter.

Norland’s visit came in the wake of his recent visit to Egypt where he met with high-level officials from Egypt and Libya to discuss updates on the Libyan crisis.

On Tuesday, he and  the US Ambassador in Egypt, Jonathan Cohen, met with Egypt’s Chief of the General Intelligence Service (GIS) Abbas Kamel.

Kamel and the two ambassadors discussed ways to accelerate a political solution to the crisis in Libya, resume oil production, and ensure equal distribution of oil revenues among the country’s two ruling sides.

This came in addition to discussions on unifying state institutions, as well as Egypt’s continuing efforts to resolve the Libyan crisis. The latter most recently included the hosting of rival Libyan military and security officials for talks in the Red Sea city of Hurghada, last week.

Late in September, the United Nations Support Mission in Libya (UNSMIL) expressed its sincere gratitude to Egypt for its efforts in facilitating the recent direct security and military talks between the Libyan rival actions.

UNSMIL said that the talks concluded with important recommendations, including the resumption of face-to-face meetings of the 5+5 JMC, and the halt in all hate speech campaigns. The talks have also paved the way for the immediate release of all those detained on account of their identity and without pre-conditions or restrictions.