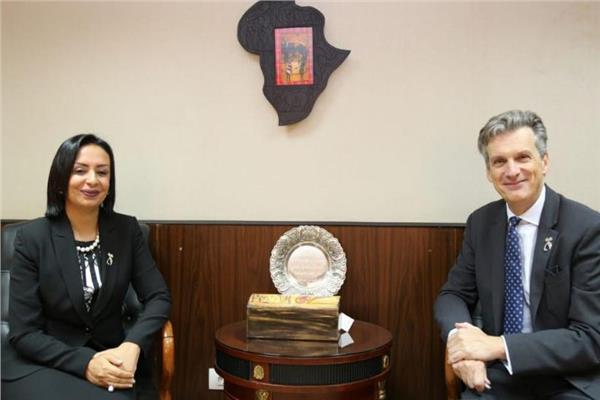 Maya Morsi, President of Egypt’s National Council for Women (NCW), participated in a Wilton Park Conferences event entitled “The Elders in conversation on women in mediation in the Arab world”.

The high-level virtual conference, which was held from 5 to 7 October, brought together around 60 experienced mediators, experts, peace builders and national and multilateral officials. The gathering, which took place in collaboration with the non-governmental and non-profit peace building organisation The Elders, aimed to promote women’s meaningful participation as mediators in peace processes in the Arab world.

It marks the 20th anniversary of the landmark UN Security Council Resolution 1325 on Women, Peace and Security, which reaffirmed the important role women play in conflict prevention and resolution. The resolution also focuses on the role of women in peace negotiations and peace-building.

Women are highly active in peace making in the Arab region, but there is a missing link between their role in grassroots peace making and senior policy circles. It is in these areas that they are under-represented, especially in roles that relate to conflict or security.

The virtual gathering aimed to contribute to bridging this gap, by bringing together women from selected countries across the Arab world who are active in mediation, including Morsi. They came together at the conference with experts and practitioners from other regions and countries, and with members of The Elders.

In sessions over three consecutive days, four Elders shared their collective experience and insight into the power and importance of women’s engagement in mediation. The sessions also heard from leaders in the Arab world about the challenges and the opportunities they face in promoting women’s participation as mediators in world still affected by the novel coronavirus (COVID-19).

As a result of the conference, the Elders published a final short policy paper with key recommendations for mediators, governments and multilateral organisations. At the same time, they used their social media channels to highlight the experiences of women mediators.

Participants were joined by members of The Elders, including Lakhdar Brahimi, Ban Ki-Moon, Graca Machel and Ellen Johnson Sirleaf, who shared their collective experience and insight into the power. The officials also highlighted the importance of women’s engagement in mediation.

The conference took place in collaboration with The Elders, with support from UN Women and the UK Foreign, Commonwealth and Development office (FCDO). During the conference, the government participants were encouraged to undertake commitments to support, strengthen and encourage networks of women mediators

“Many thanks to Dr Maya Morsi for her contribution to this Wilton Park Conference. The UK and Egypt share a strong commitment to supporting the contribution of women to peace and security around the world,” Adams wrote.

In response, Morsi wrote on her official Twitter account, “Women’s meaningful participation in peace process & negotiations creates more inclusive policies & more sustainable peace negotiations. Glad to be part of The Elders Conversation on women in mediation in the Arab World.”