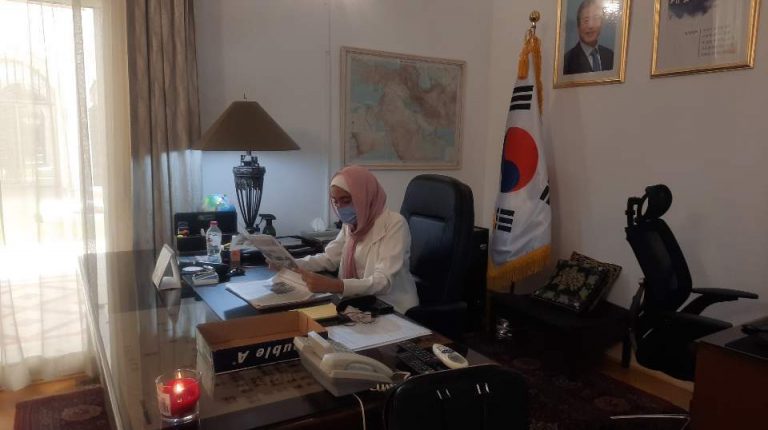 Every year since 2012, the world has celebrated the International Day of the Girl Child on 11 October, when the needs and challenges girls face worldwide are highlighted and addressed.

The day aims to promote girls’ empowerment and the fulfilment of their human rights, through the Girls Take Over initiative.

This year, the celebration was creatively marked as a way of getting around the disruptions caused by the novel coronavirus (COVID-19) pandemic.

In Egypt, the reins of power have been handed over to 31 girls as a form of empowerment, with the youngsters taking over from high-level officials in Egypt for one day. This will see them take on work in different Ministries, taking the reins from senior leaders in the Egyptian government, ambassadors from many embassies in Egypt, heads of UN agencies, and civil society leaders.

The Girls Take Over initiative in Egypt is part of a series of celebrations to mark the International Day of the Girl Child, which has been facilitated by Plan International Egypt. It started in late September, and is set to culminate in a “Girls’ Summit” which will be held on 11 October.

Hong Jin-wook, South Korea’s new Ambassador to Egypt, was among the first ambassadors that welcomed the initiative in 2020, in which he received 18-year-old Egyptian youngster Eman at the embassy on Wednesday. Eman took over his role as Ambassador for a day, with the Embassy organising a press conference to mark the occasion.

During the course of the day, Eman had the chance to experience the Korean Ambassador’s typical working day. She also spoke with the embassy’s team about its policies and efforts to actively integrate girls and women in all its projects.

During the press conference, Ambassador Hong praised the initiative and Egypt’s Ministry of Social Solidarity’s efforts in empowering girls nationwide. He said that this year has been the embassy’s first participation in such an initiative, and will not be the last.

Hong also praised this year’s theme which aims to ensure girls gain equal freedom and access to online technologies. The Ambassador said this is an important topic not only because of the technological advances that we are witnessing, but also because we should get more prepared in handling gender equality with online edge.

“Gender equality is a very important, serious issue, and it is an area where Egypt and South Korea could cooperate and learn from each other,” Ambassador Hong said, “It is also not something to avoid, it is now something that we should live with.”

He added that from a systematic perspective, both Egypt and South Korea are prepared to handle the gender equality issue. This does not mean, however, that it has translated into daily life, with many women still suffering from a lack of equality in their day-to-day lives. Unfortunately, Korea and Egypt are still far away from true equality between men and women, Hong said.

Inas Omar, Monitoring and Evaluation Assistant, Relationship Building Coordinator at Plan International Egypt, talked about the selection criteria for the girls who wished to take part in the Girls Take Over initiative.

She said that most of those who were picked had participated before in many awareness programmes, as well as community activities, and they were nominated to participate in the initiative due to their work.

Omar noted that some conditions were put into effect in order to choose the girls, including that they had to be aged between 14 and 23 years of age, and have also previously participated in community activities.

Furthermore, they needed to be aware of the current problems that girls their age face, as well as have good presentation skills, in order to be able to convey these problems accurately.

Omar also said that, after the girls were accepted into the initiative, Plan International’s lead advisor trained the girls and conducted a matching exercise. This would ensure the participants were matched with the best suitable take-over position depending on their skills and personalities.

“I was very afraid as I was entering the embassy, but after a little time, I felt relaxed, calm, and very comfortable,” one 18-year-old ambassador-for-a-day said.

She added that there is currently still a preference for men in many aspects of life, and that gender inequality remains a key issue.