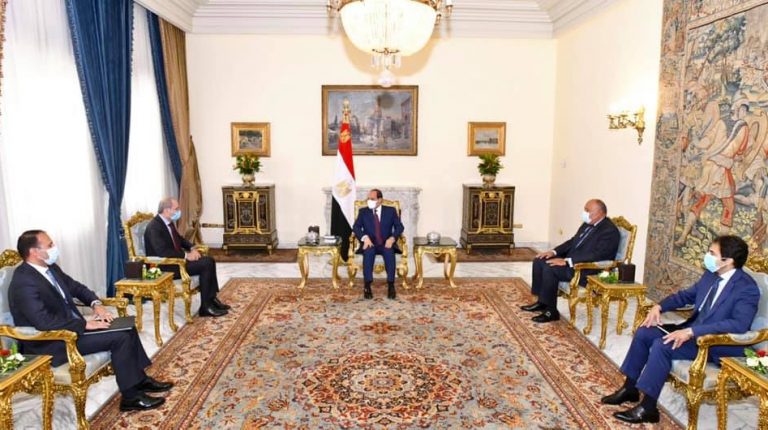 Egypt’s President Abdel Fattah Al-Sisi met, on Tuesday, with Jordan’s Minister of Foreign Affairs Ayman Safadi, during the latter’s visit to Cairo, to discuss the bilateral relations between the two countries.

During the meeting, which took place in the presence of Egypt’s Minister of Foreign Affairs Sameh Shoukry, the two sides also discussed regional issues of mutual interest and means of boosting cooperation across the Arab region.

Rady added that the meeting also witnessed a review of the latest developments in the region, particularly relating to the Middle East peace process. Both Al-Sisi and Safadi emphasised the importance of intensifying international efforts to settle the Palestinian issue based on international legitimacy, and resuming negotiations.

They also discussed the latest updates related to the situation in Libya, with President Al-Sisi emphasising that the main goal is to stabilise the current situation on the ground according to the stated lines. He also stressed the need for a comprehensive solution to restore stability and security in the country.

Settling the situation in Libya according to the Egyptian vision should be achieved through a political path, and the outcomes of the Berlin Conference and Cairo Declaration.

The Egyptian President concluded that joint coordination, willpower, and Arab unity will impose determinants and lines for national security across the region.

Moreover, Al-Sisi expressed his aspirations for continued coordination between Cairo, Amman and Baghdad, in light of the growing challenges that the region is facing. He added that both Egypt and Jordan have strong historical ties and brotherly relations at the official and popular levels.

As part of his visit to Egypt, Safadi will also take part in a trilateral meeting between the Ministers of Foreign Affairs from Egypt, Iraq and Jordan.