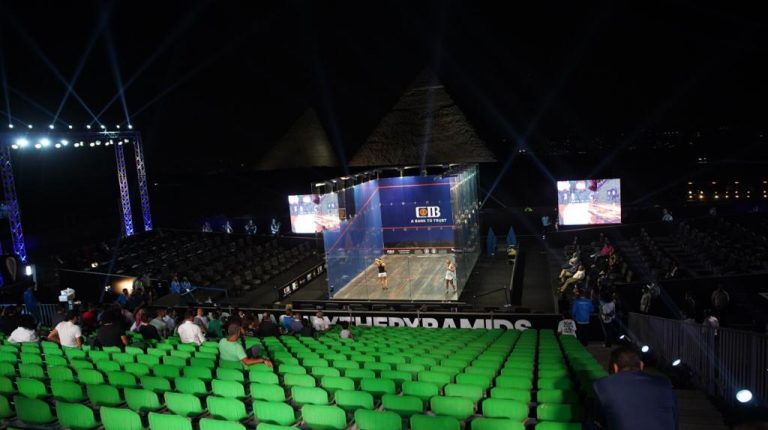 The CIB Egyptian Squash Open 2020 was launched, on Monday, at the iconic Pyramids of Giza, under the auspices of the Ministries of Youth and Sports, and Tourism and Antiquities.

The tournament, which will last until 17 October, will bring together the world’s best 96 squash players from 19 different countries.

The players will be competing for a total financial prize of $540,000 in both the Men’s and Women’s events. This is the largest prize sum at squash tournaments this season, since the emergence of the novel coronavirus (COVID-19) pandemic.

With squash tournaments and other sporting events worldwide having been suspended for months due to the pandemic, Egypt will be hosting the tournament under strict health and safety protocols.

The Pyramids have become synonymous with squash in the past few years, providing a tremendous spectacle for the sport and for athletes. In addition, it will highlight Egypt’s leading position in the global squash arena, and its appeal as one of the world’s greatest tourist destinations.

The tournament’s matches will be broadcast on ON Time Sports as well as other international channels. Tazkarti will be offering the championship tickets electronically.

Round three of the CIB Egyptian Squash Open 2020 witnessed the qualification of World No 2 Ali Farag, and World No 18 Mostafa Asal in the Men’s matches. World No 1 Nouran Gohar and World No 6 Hania Elhamammy qualified for the quarter finals in the Women’s matches.

On this occasion, Hisham Ezz Al-Arab, Chairperson and Managing Director of CIB Egypt, said, “As an integral part of Egyptian society, CIB is always looking to strengthen its impact on the local community, and we are proud to support the Egyptian squash platform, whilst looking forward to witnessing the talent and skill of our Egyptian champions.”

He also said, “Over the years, supporting squash has become part of our social responsibility as it benefits the Egyptian athletic community while raising Egypt’s profile across the globe. We are honoured to support our country’s squash champions who continuously showcase their professionalism and dedication to the world while inspiring a new generation of champions.”

Amr Mansi, Tournament Director and CEO of IEvents, said, “It’s such a privilege to see my dream of organising an event of this scale manifest itself. When I see the players in action, competing, and achieving outstanding feats, it fills me with gratitude, especially towards the Ministry of Youth and Sports and the Ministry of Tourism and Antiquities, along with several other major entities.”

Mansi added, “Since the tournament’s inception, the bank has been entirely devoted to ensuring the event takes place. Year after year, and during such a turbulent one as 2020, they’ve constantly searched for ways to go even grander than ever before, and continuing to be the tournament’s main sponsor and patron.”

The Round Two matches took place on 10-11 October at the New Giza Sporting Club, where World No 4 Tarek Momen and World No 7 Marwan El Shorbagy qualified for Round Three in the Men’s competition, and World No 4 Nour El Tayeb in the Women’s event.