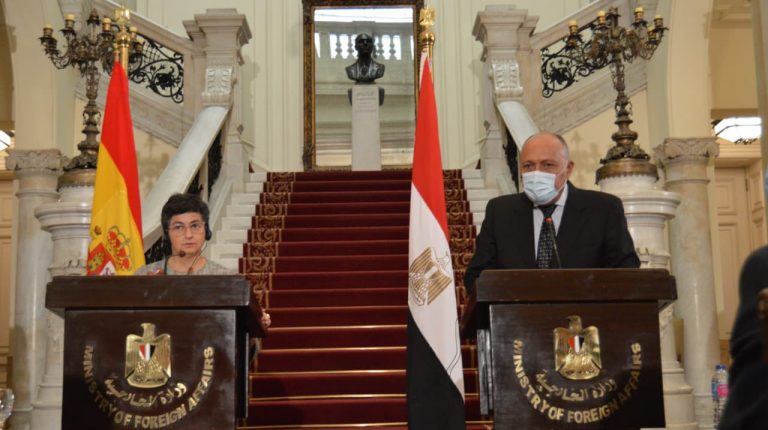 Egypt’s Minister of Foreign Affairs Sameh Shoukry met with his Spanish counterpart Arancha González Laya in Cairo, on Saturday, to discuss the situation in the Mediterranean Sea and Middle East regions.

During a joint press conference following their meeting, Shoukry said that Spain holds a pioneering position in the relationship between the two shores of the Mediterranean Sea.

Shoukry also said that the European country plays an important role in strengthening the relationship between Egypt and the European Union (EU).

“Spain supports Egypt’s relations with the European Union, and, with a close knowledge of the situation in Egypt, plays an important role in strengthening it,” Shoukry said.

He noted that Spain is aware of the reality in Egypt, as it has for long closely followed the situation in the country, and that it understands the issues that Egypt faces.

The Egyptian Foreign Minister also said that Egypt and Spain are allies in eliminating terrorism, and continue to coordinate and cooperate with each other at international forums. He added that the two sides look forward to continuing this relationship.

The two ministers also reviewed the situation in Syria, Libya and in the eastern Mediterranean, as well as the importance of concerted efforts between Egypt, Spain and the EU to achieve security in the region.

“We have joint coordination on other issues from the war on terror and other things for the benefit of both countries,” Shoukry added.

As he welcomed the Spanish minister, Shoukry noted that she had held a meeting with President Abdel Fattah Al-Sisi in addition to an expanded session of talks with delegations, to discuss aspects of cooperation between the two countries in various fields.

For her part, González Laya said that the talks with her Egyptian counterpart touched on joint work in the fields of combating terrorism and human trafficking. The two ministers also discussed international criminal networks, given that this matter preoccupies the two countries.

She added that Egypt and Spain are continuing efforts to strengthen the strategic partnership as part of the Euro-Mediterranean initiative.

“We spoke and exchanged views, and I conveyed my appreciation to Minister Sameh Shoukry, for the work done by the government and the Egyptian state in the field of empowering women and the environment,” González Laya said.

Referring to discussions on resolving the Libyan crisis, and the emphasis on the agreement in viewpoints between Egypt and Spain on this issue, González Laya said, “We talked about normalizing relations with Israel and support that, and we continued discussions about the peace process and solving the Palestinian issue.”

The two ministers held talks prior to the press conference in which they signed a Memorandum of Understanding (MoU) to put in place political consultations with the aim of developing relations between Egypt and Spain.

The two ministers also discussed means to improve bilateral relations and coordinate on regional files of mutual concern, and the situation in the Mediterranean and Middle East regions, including economic and security developments.