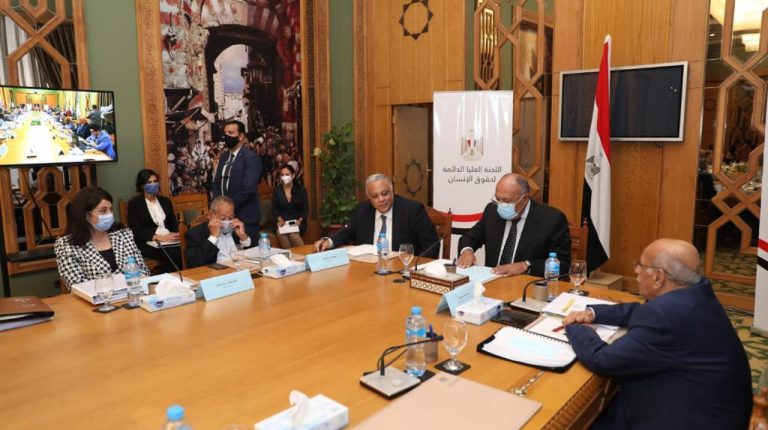 Egypt is poised to launch its first integrated and long-term National Human Rights Strategy, to promote fundamental rights and freedoms.

The announcement came on Saturday evening, during a meeting of the Supreme Standing Committee for Human Rights’ (SSCHR) advisory board at the headquarters of the Ministry of Foreign Affairs.

Human rights are an essential component of the modern civil state, Shoukry said, adding that the committee has accordingly gathered the nation’s brightest minds, public figures, and representatives from civil society on the advisory board.

The minister said that this approach is consistent with the participatory planning process pursued by the state, through community dialogue. It takes into consideration the visions, proposals and aspirations of the Egyptian people.

Towards this goal Egypt will not start from scratch, as the country has well-established national institutions, a progressive constitution and unique legal heritage, the minister explained.

“These hearings will start in Cairo, and will then also be held in Alexandria, Ismailia, Minya, Luxor, and Mansoura,” Gamal El-Din said.

He also said that building a strong, positive human rights culture is essential, with education playing an integral role to ensure that people in Egypt understand their human rights and feel empowered.

Advisory board: Who is Who and its goals

The 25-member advisory body is made up of public figures and experts across a diverse spectrum of specialisations, and who will contribute opinions to the draft national strategy for human rights.

Members of the advisory body praised the SSCHR’s initiative to prepare the strategy according to a disciplined scientific approach that identifies the strengths, opportunities, and challenges related to several human rights issues.

The committee will also prepare the first action plan which will include a large set of main and subsidiary objectives. The plan will determine the bodies responsible for their implementation according to a clear timetable, and include a number of performance indicators that will be subject to periodic monitoring and evaluation.

Professor Niveen Mossad told Daily News Egypt that the strategy aims to reflect the real conditions of human rights in Egypt, and showcase the efforts being undertaken on those issues.

The country has achieved a lot in the economic, health, social, and women rights, however, these achievements were not highlighted. The strategy offers a chance to include the insights of everyone who wants to participate to advance human rights.

“No country is able to do that only through state institutions, it must be done through partnership with civil society organisations, public figures, and scholars to advance human rights,” she added.

She explained that the strategy is divided into several pillars including, political and civil rights; economic rights, women and youth empowerment. Each pillar includes opportunities and challenges, determining what the state has achieved in each of these topics, and what is left to be done to improve them.

“It is a long-term process, some of these issues can be resolved with decisions, but some other are also dependent on factors such as allocation of resources,” Mossad said, “Regarding female empowerment, Egypt has achieved a lot recently, however one of the main goals in the strategy is to push it even further, especially in the judiciary.”

She added that the strategy aims to open up the way for women to enter into Egypt’s Courts of Administrative Justice, for example, stressing that over the last years, women have been appointed to high-level positions, including at the ministerial level, such as the Ministries of Planning, Health, and International Cooperation.