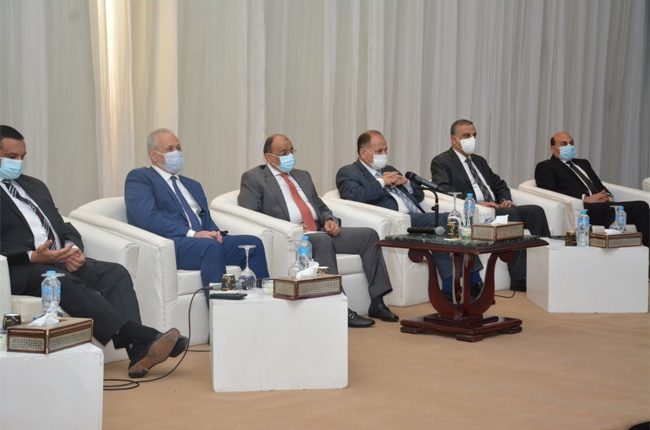 Egypt’s Minister of Local Development Mahmoud Shaarawi has held an open discussion with a large number of representatives from communities targeted by the government’s Haya Karima (A Decent Life) initiative.

Shaarawi discussed with citizens their evaluation and views on the Decent Life initiative, whilst making note of the Egyptian leadership’s keenness to follow up on the initiative’s implementation processes.

The minister indicated that President Abdel Fattah Al-Sisi is ensuring that the Decent Life initiative, which aims to improve the lives of the neediest citizens, is receiving the attention it deserves.

During the meeting, the participants praised the Egyptian government for its efforts, whilst also expressing their appreciation for President Al-Sisi. They also made note of his interest in villages that are suffering the effects of long-term neglect by a

The participants also stressed that the initiative has contributed to strengthening the affiliation, and documenting the link, between the citizen and the government. The projects under the initiative have also played a major role in improving the level of public services in rural communities at all levels.

The citizens affirmed their appreciation for the opportunity to express the real and urgent needs of their villages and arrange their priorities. The committees have played a significant role in the planning process and the selection of projects to be implemented.

One of the most prominent demands brought to the discussion table by the participants relates to medical services. They request that sufficient doctors and medical personnel are provided to villages to operate health facilities, and to complete sanitation projects that include all the targeted villages during the next stage.

The participants also stressed the importance of working to create permanent job opportunities aimed at youth. This would occur through: intensifying economic investment projects; expanding in industrial and craft areas; expanding support for small farmers; providing fertilisers and seeds; and supporting animal production, especially in light of the coronavirus (COVID-19) pandemic.

The minister assured the participants at the meeting that the most important characteristic of the Decent Life Initiative is the application of the participatory approach. This is in addition to the integration of citizens in the planning and follow-up stages of implementation, which is the role played by the village-level development committees.

The committees include, in their membership, representatives from among the local citizenry, as well as civil communities and executive bodies.

Shaarawi said that Egypt had invested about EGP 13bn towards implementing the first and second stages of the Decent Life Initiative.

He expressed Egypt’s aspiration for committees to play a role in supporting the government’s efforts to eliminate the problems of unplanned urban growth. He noted that this aspect is particularly detrimental to Egypt’s agricultural land wealth. The committees are also to cooperate with the authorities in adhering to urban plans, in order to provide quality infrastructure services.

Egypt launched the second phase of the presidential Decent Life Initiative with investments of EGP 9.6bn. The initiative targets 375 rural communities in 14 governorates, especially in Upper Egypt. It is targeting 1,000 villages, and its completion is expected by the end of fiscal year (FY) 2023/24.