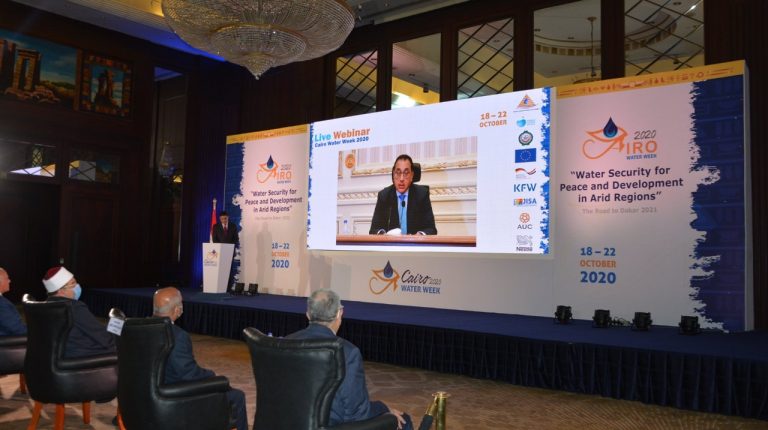 The 3rd edition of Cairo Water Week (CWW) commenced, under the auspices of President Abdel Fattah Al-Sisi, on Sunday, under the theme “Water Security for Peace and Development in Arid Regions – the Road to Dakar 2021”.

During a virtual speech for the opening session, Egyptian Prime Minister Mostafa Madbouly said that achieving water security will have a great impact in sparing the world from international risks and conflicts. It also greatly contributes to achieving peace, and accelerating the pace of development.

The Prime Minister said that there is a need for a binding legal agreement on the rules for the Ethiopian dam’s filling and operation, in a way that preserves common rights and interests.

Not taking any unilateral decisions that would negatively affect stability in the region is a must, according to Madbouly. He also said that Egypt is keen to continue negotiations with Sudan and Ethiopia to reach the binding agreement.

“Deadlock in the negotiations on the Grand Ethiopian Renaissance Dam (GERD) will have negative repercussions on stability and development in the region in general, and on Egypt in particular,” Madbouly said, “With our recognition of Ethiopia’s right to development, the Nile waters for Egypt are a matter of life and an issue of existence.”

The Prime Minister called on experts and technicians to come up with recommendations relating to issues of trans-boundary rivers that can be built upon.

“Unilateral actions of upstream countries will inevitably lead to negative consequences that threaten global peace, as we see many upstream countries trying to extend their hegemony over the water basins of many rivers in the Arab region, to control water flows and harm downstream countries,” Madbouly added.

The Prime Minister noted that the CWW contributes to promoting Egypt’s vision 2030 at the regional and international levels.

He added that access to water is one of the most important pillars of Egypt’s national security, as it is related to comprehensive sustainable development plans. At the same time, he noted that the state is striving to preserve water resources and maximise their utilisation.

Madbouly pointed to Egypt’s ambitious programme to double the quantities of desalinated water for use as potable water. The programme is likely to see investments amounting to EGP 135bn until 2030.

He stated that competition over water is escalating worldwide, and it is therefore imperative that governments use all available tools to contribute to achieving water security, particularly amid the impacts of climate change.

These tools include spatial planning, urban planning, strategic environmental assessment and planning to adapt to climate change, taking into account the needs and priorities of the economic sectors.

Abdel Aaty said that Egypt is relying on the waters from the River Nile to fulfil 97% of its water needs. The minister added that Egypt is the most arid country in the world, and currently suffers from a 90% gap in its water resources.

He added further that climate change is one of the main challenges that water security faces, particularly because of the extreme climatic events.

Abdel Aaty stressed that, as a dry country, Egypt is vulnerable to the impacts of climate change including the sea level rise.

The state is also importing virtual water in the form of food commodities to cover the rest of the deficit, accounting for 56% of its water resources if cultivated in Egypt.

CWW is being held in Cairo from 18-22 October in cooperation with national, regional and international partners. The event aims to promote water awareness, fostering new thinking around the most pressing water-related challenges and taking actions towards integrated water resources management and conservation.