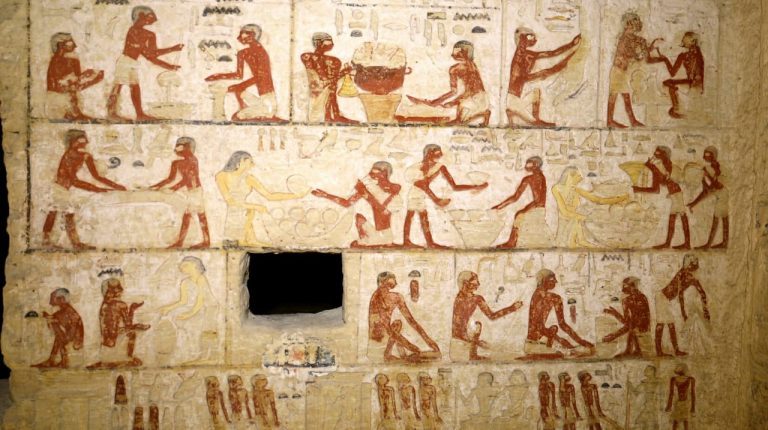 The online streaming platform, Netflix, announced that it will release the documentary, Secrets from Saqqara Tomb, on 28 October.

The documentary provides an in-depth overview of the discovery of a singularly significant ancient site that came to life beneath the sands at Egypt’s renowned Saqqara archaeological site.

Directed by James Tovell and Richard Bradley and Caterina Turroni as Executive Producers, the Lion Television and At Land Productions documentary film follows a team of local archaeologists excavating the never before explored passageways, shafts, and tombs. It follows the piecing together of the secrets behind Egypt’s most significant find in almost 50 years.

Netflix said that the film documents the unearthing of a tomb that had lain untouched for almost 4,400 years. It focuses on the Egyptian archaeologists’ work to decipher the history of the extraordinary find.

“This has been an exciting moment for the whole world. Shooting this film has been an experience full of thrilling surprises,” Tovell said, “Working with an Egyptian team that has a deep connection with their ancestors has made the project even more unique.”

Secrets of the Saqqara Tomb follows the decoding of the tomb of an Old Kingdom priest, called Wahtye, which has remained unopened for 4,500 years, and the excavation of five shafts to uncover an astonishing ancient mystery.

Filmed inside Wahtye’s tomb, the documentary dives into the secrets of the priest’s life, tracing his role in Ancient Egypt. Moreover, it provides valuable additions regarding the economic, religious, social, and cultural life in Egypt during Wahtye’s lifetime.

The film provides the audience with an in-depth description of the excavations, the joy of discovering the artefacts, the surprisingly well-preserved mummies, and the vivid paintings and craftsmanship evident on the walls.

The documentary is to be released globally in 190 countries, with subtitles in over 30 languages also available, alongside a version dubbed in English.

Wahtye is described as a priest who served during Egypt’s Fifth Dynasty, under the Pharaoh Neferirkare. His tomb measures about 33 feet in length, 10 feet in width and 10 feet in height, and was uncovered in the Saqqara area in 2018. It contains two levels filled with 55 statues carved into the walls, and colourful renditions of the priest and his family.

During the journey of discovery, the mission found over 3,000 artefacts. Within the boundaries of a temple, dedicated to the Egyptian cat goddess Bastet, the team discovered a mummified lion cub, the first of its kind to be discovered in Egypt, signalling a thrilling first in Egyptology.

With archaeology normally a profession requiring great patience and years of waiting for career-changing discoveries, this mission was unlike any other. New, jaw-dropping discoveries found quickly, all of which have been captured on film. Also caught on film and included in the documentary was the excavation of the burial shafts to Wahtye’s tomb, Tovell said.

The documentary was filmed in Saqqara near Cairo, less than a mile from the site of the Step Pyramid, widely recognised as the world’s oldest and most iconic stone structure.