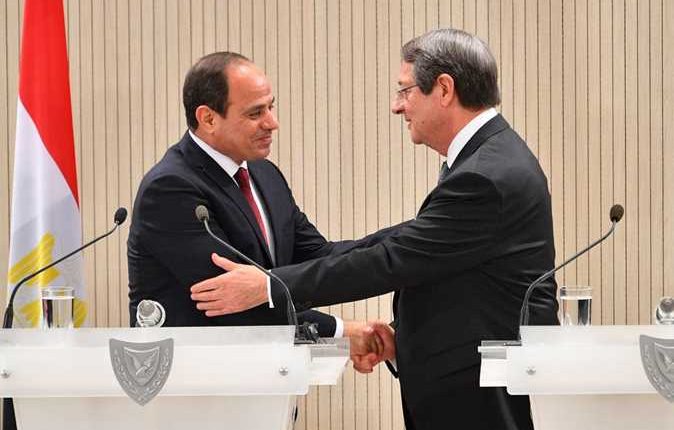 Egypt’s President Abdel Fattah Al-Sisi met with his Cypriot counterpart Nicos Anastasiades during the former’s official visitto Nicosia, on Wednesday, to discuss the growing relations between the two countries.

During the meeting, the two leaders tackled different areas of cooperation between the two countries, particularly energy, as well as the tripartite collaboration between Egypt, Cyprus, and Greece.

Al-Sisi will also take part in the eighth tripartite summit with his Greek and Cypriot counterparts.

The Egyptian President praised the strong relations between Cairo and Nicosia, and the Cypriot support of Egypt at regional and international forums and organisations.

He also expressed Egypt’s keenness to continue boosting these relations, and intensify coordination regarding topics of mutual concern in both bilateral and tripartite level with Greece.

Both Al-Sisi and Anastasiades stressed the need to proceed with the implementation of joint projects that were agreed upon under the tripartite cooperation mechanism.

They hope that this mechanism could be a model for coordination and consultation between Mediterranean countries.