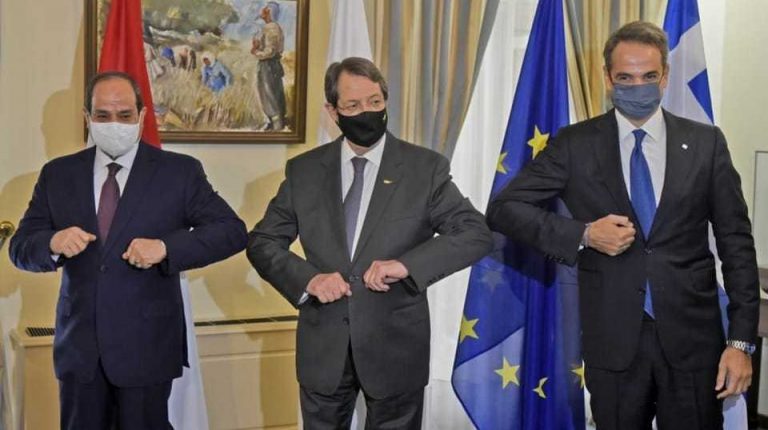 The meeting discussed boosting cooperation between the three countries in various fields.

During the meeting, Al-Sisi said that Egypt is looking forward to the implementation of more energy and strategic projects with Cyprus and Greece, similar to those recently launched by the East Mediterranean Gas Forum.

The meeting also addressed the latest updates in the Eastern Mediterranean region, alongside issues in the Middle East, and the dispute over the Grand Ethiopian Renaissance Dam (GERD).

The leaders discussed strengthening economic, commercial, investment, tourism, and cultural cooperation between the three countries, with the aim of establishing a new phase of strategic integration between them. This integration will be based on common development goals.

Moreover, Al-Sisi stressed the importance of concerted efforts by all eastern Mediterranean countries in facing the challenges that threaten the region, and to restore stability. He highlighted the need to confront the countries that support, arm and finance terrorism, stressing the need to face the provocative actions in the eastern Mediterranean.

The northern part of Cyprus has been trying to split since 1974, proclaiming itself as the Turkish Republic of Northern Cyprus. It is recognised only by Turkey.

The tripartite summit comes amid tensions between Turkey and Greece over the maritime borders in the eastern Mediterranean region, and rights to dig for oil.

The three leaders also agreed on the importance of intensive work to reach a comprehensive political settlement within the framework of preserving the unity, independence and territorial integrity of the countries of the region.

Nicosia’s summit also touched the efforts for countering terrorism and extremism, and illegal migration. It also called for ending the presence of foreign forces in Syria.

In October 2016, Cairo hosted the fourth round of the trilateral summit between Egypt, Cyprus, and Greece. As a result of the summit, the three countries agreed to work on the implementation of new projects in the fields of energy, maritime transport, tourism, and agriculture.