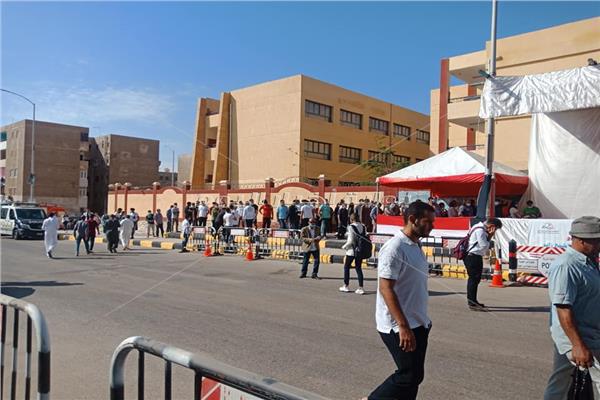 The National Council for Human Rights (NCHR) electoral mission, which is observing the voting process in the first phase of the House of Representatives elections, has recorded a large turnout in several areas of Giza governorate.

The mission said that the rural areas in Giza, such as the Abu Al-Nomros electoral district, saw a crowd of supporters for candidates participating in the elections gathering outside polling stations.

The NCHR also said that it has sent a field mission to observe the electoral process in the Dokki, Agouza, and Warraq regions of Giza governorate, with moderate voter turnout reported in these areas.

The electoral commissions in the Bulaq Dakrour and Kerdasa districts witnessed a large turnout, particularly among female voters, as well as in the committees of Matrouh governorate. Bulaq Dakrour electoral committees also reported that a number of representatives for some candidates were deployed to help voters and extract committee numbers for voters to facilitate their voting.

According to local media reports, electoral committees in the Kafr El Dawar district of Beheira governorate witnessed a good turnout among young people and elderly voters since polling stations opened.

The council’s operations rooms in other governorates confirmed that the voting process witnessed a good turnout in rural areas. Electoral committees at Imbaba, Kerdasa, and Abu Al-Nomros, as well as some committees in the governorates of Fayoum, Aswan, Qena and Wadi Al-Gadeed, witnessed a large voter turnout in the early hours of voting.

A number of voters in front of several committees chanted patriotic songs in support of Egypt.

A group of young people from Al-Warraq, Bashtil, and Auseem in Giza Governorate participated in organising the electoral process. They did so by helping voters find out their electoral committees and their numbers as they began to appear in front of polling stations.

In Giza’s Kerdasa district, those in charge of securing the committees gave priority entry to voting to the elderly, away from crowding before the committees. They also prevented the entry of any children accompanying female voters in the interests of their safety.

According to the National Elections Authority (NEA), 10,240 polling stations will be open during this stage. The results of the first round of voting are expected in the coming week, and run-off rounds will take place on 23-24 November.

Egyptian expats in 124 countries completed the first phase voting on Friday at 140 polling stations located at embassies and consulates.

Voters bribed by all possible means