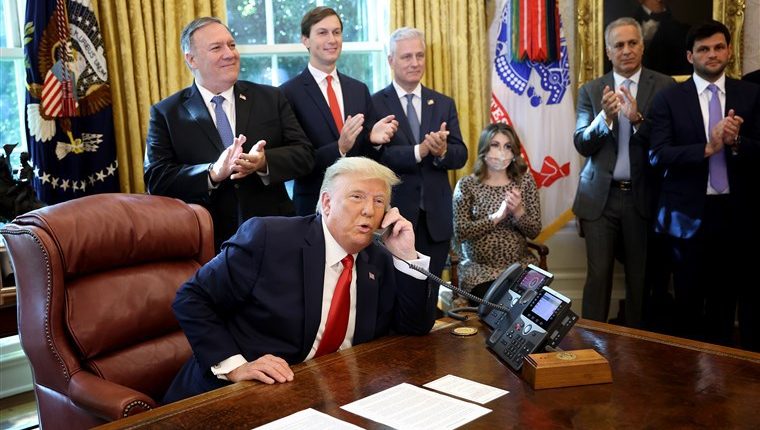 The US-brokered deal normalising ties between Sudan and Israel has garnered a mixed reaction, having been welcomed by many countries, but condemned by the Palestinians who view it as “betrayal of their cause”.

On Friday, US President Donald Trump announced that Sudan has agreed to normalise relations with Tel Aviv, making Sudan the third Arab country to do so, following the UAE and Bahrain in recent weeks. The new deal marks a new foreign policy achievement for Trump ahead of the US presidential election.

Egypt’s President Abdel Fattah Al-Sisi welcomed the joint efforts between the US, Sudan and Israel, which will see Khartoum and Tel Aviv normalise their ties. The Egyptian President also praised the efforts aiming to achieve regional peace and stability. The UAE, Bahrain, Germany, and Greece also welcomed the deal.

Various Palestinian movements, including Hamas and Fatah, Islamic Jihad, the Palestinian People’s Party, and the Popular Front for the Liberation of Palestine (PLO), have all condemned the move. They have also voiced their reservations at the increasing number of Arab countries who are normalising their ties with Israel, considering this a betrayal of their cause.

“In the coming weeks, the two countries will begin negotiations on cooperation agreements in agriculture, economy, trade, aviation, migration issues, and other areas of mutual benefit,” a White House statement read.

Unlike the UAE and Bahrain, Sudan had been a foe of Israel, having taken part in several wars against them in 1948 and 1967. Sudan had also hosted the 1967 Arab League conference which produced the Khartoum Resolution of The Three No’s, when the pan-Arab organisation swore “no peace with Israel, no recognition of Israel, and no negotiations with it”.

“Today, Khartoum has said ‘yes’ to peace with Israel, yes to the recognition of Israel and yes to normalisation with Israel,” Israel’s Netanyahu said, “This is a new era, an era of true peace, it is a peace that is expanding with other Arab countries, with three of them joining in recent weeks.”

The Sudanese move does not come as a surprise. It follows President Trump’s announcement, last Monday, that his country will remove Sudan from the list of state sponsors of terrorism. This would occur once the country pays $335m in reparations to the US victims of the 1998 Al-Qaida bombings of US embassies in Kenya and Tanzania.

Trump said, on Friday, that at least five other countries want to normalise ties with Israel, with Saudi Arabia expected to also strike a deal with Tel Aviv.

Sudan Sovereignty Council Chief Fattah El-Burhan and other Sudanese military commanders appeared to be more excited toward normalising ties with Israel than the transitional government headed by Hamdouk.

El-Burhan undertook a meeting on the matter with US and UAE officials on 20 September, during discussions that also reviewed Sudan’s removal from the US Terror List. The meeting additionally looked into writing off the country’s debts to the US.