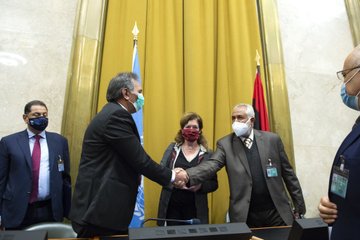 Egypt has welcomed a permanent and complete ceasefire agreement that was signed by the rival Libyan parties, on Friday, following United Nations (UN)-facilitated talks in Geneva.

In a statement on Friday, an Egyptian Ministry of Foreign Affairs Spokesperson praised the agreement which aims to maintain calm on the front lines and avoid escalation. The spokesperson also called on the countries involved in Libya to contribute to the current efforts and ensure a non-escalation.

“This is also a crucial step for the resumption of political negotiations and hopefully a turning point in the Libyan crisis. EU will be there to support,” Borrell tweeted.

Germany’s Foreign Minister, Heiko Maas, also tweeted that “the ceasefire agreement is the first ray of hope for the people of Libya in a long time”.

UN Secretary-General Antonio Guterres hailed the ceasefire agreement, tweeting that “this is a fundamental step toward peace and stability”.

Russia’s Ministry of Foreign Affairs also hailed the ceasefire agreement as a significant step toward resolving the Libyan crisis.

Meanwhile, on Friday, Turkish President Recep Tayyip Erdogan said that the agreement “did not appear to be credible”, adding that “it was not made at the highest level”.

The United Nations Support Mission in Libya (UNSMIL) announced, in a statement, “the two Libyan delegations to the 5+5 Joint Military Commission talks signed a complete, countrywide, and permanent ceasefire agreement with immediate effect”.

It added that the Libyan parties “agreed that all military units and armed groups on the frontlines shall return to their camps”.

“This shall be accompanied by the departure of all mercenaries and foreign fighters from all Libyan territories land, air and sea within a maximum period of three months from today,” The statement said, “With immediate effect, until the new unified government assumes its functions, all military agreements on training inside Libya shall be suspended, and training crews shall depart the country.”

UNSMIL said that the agreement “establishes a Joint Police Operations Room which shall propose and implement special arrangements to secure the areas cleared of military units and armed groups”.

Turkey has deployed thousands of mercenaries to fight with the Government of National Accord (GNA) in Libya, according to the Syrian Observatory for Human Rights. The UN also said that hundreds of Russian Wagner Group are operating in Libya with the Libyan Arab Armed Forces (LAAF), headed by Commander Khalifa Haftar.

The fourth round of the 5+5 Libyan Joint Military Commission commenced in Geneva on 19 October, as part of UN efforts to reach a peaceful solution to the long-time crisis in the country.

Between 11 to 13 October, meetings between delegations representing Libya’s House of Representatives and its High Council of State were held in Cairo to discuss constitutional arrangements.

In late September, military and security delegations representing the two rival Libyan parties met in Hurghada for high-level talks under the auspices of the UNSMIL.

The Libyan arena has, in recent weeks, witnessed rapid developments, the most important of which has been the resumption of the country’s oil production and export. The GNA’s head, Fayez Al-Sarraj, also made an announcement of his intention to resign by the end of October.

In August, Al-Sarraj and Libya’s Parliament Speaker Aguila Saleh announced, in two separate statements, that they had agreed on a Libya-wide ceasefire.