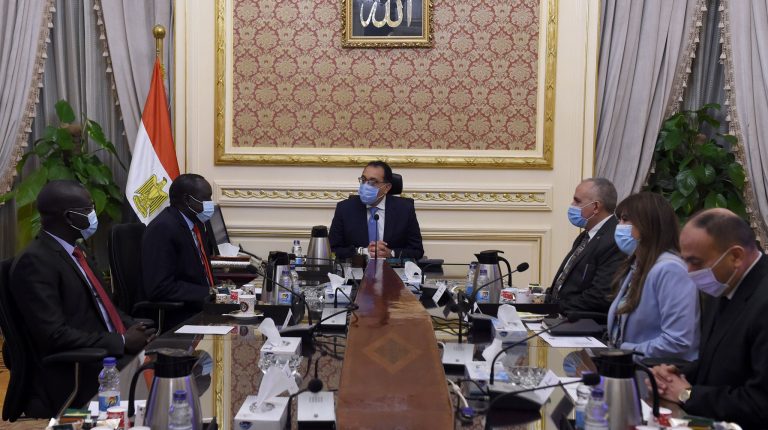 Egypt’s Minister of Water Resources and Irrigation Mohamed Abdel Aaty was also present at the meeting.

During the discussions, the two ministers praised the level of cooperation between the two countries.

Madbouly said that Egypt will spare no efforts in providing support to South Sudan in various fields, with a particular focus on South Sudanese students in Egypt. He noted that Egypt’s President Abdel Fattah Al-Sisi always directs for supporting students from friendly countries.

The Prime Minister added that Egypt is ready to set up investment projects in South Sudan, focusing on the latter’s priority areas.

Moreover, Madbouly directed for the Ministry of Foreign Affairs to speed up the formation of a Joint Higher Committee between Cairo and Juba, with its first meeting to be held in Cairo before the end of 2020.

For his part, Gatkuoth thanked Madbouly for Egypt’s support for South Sudan during the recent floods in the country. He also expressed Juba’s desire to benefit from Egypt’s experience in building South Sudan’s capacity of South Sudan, and Egyptian investments in agriculture, irrigation, electricity and other infrastructure projects.

Gatkuoth reviewed aspects of the growing cooperation with Egypt on water projects, praising the experiences provided to South Sudan by Egyptian irrigation experts. He noted the particular cooperation that is taking place in clearing waterways and lakes, and building the South Sudanese Ministry of Irrigation and Water Resources’ capacities.

He also praised Egypt’s support for South Sudan in the field of education. This has included work in establishing industrial schools in South Sudan, and the Ministry of Higher Education’s decision to increase the number of scholarships for students from South Sudan to study at Egyptian universities.