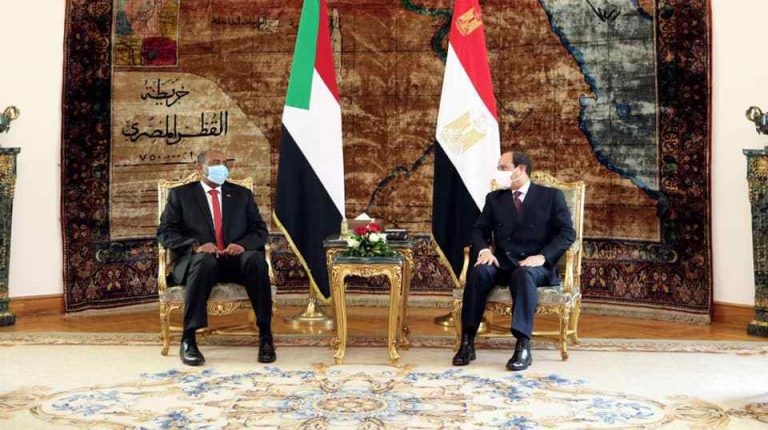 During the visit which came at the invitation of Egyptian President, Al-Burhan was accompanied by Sudan’s Minister of Foreign Affairs, Omar Qamar Al-Din, and Head of Sudan’s General Intelligence, General Jamal Abdul Majeed, according to the Sudan News Agency (SUNA).

Al-Sisi and Al-Burhan asserted their commitment to reaching a legally binding agreement on the filling and operation of the Grand Ethiopia Renaissance Dam (GERD) that takes into consideration the interests of Egypt, Sudan, and Ethiopia.

The pair also emphasised the significance of the water issue for both countries, as a matter of national security.

Also on Tuesday, the Foreign and Irrigation Ministers representing Egypt, Sudan, and Ethiopia will discuss the resumption of negotiations regarding GERD. The talks are set to take place under the auspices of the African Union (AU).

Earlier on Monday, Egypt’s Ministry of Water Resources and Irrigation announced the country’s readiness for involvement in the negotiations. This follows their suspension since August, to reach a fair, balanced, and binding agreement that takes into consideration the interests of the three countries.

Meanwhile, Sudan’s Minister of Water and Irrigation Yasser Abbas said that his country will adhere to tripartite negotiations under the AU’s auspices, in order to reach a binding agreement over the GERD’s filling and operation.

Abbas asserted in a letter to South Africa’s Minister of International Relations and Cooperation, Naledi Pandor, that negotiations cannot be resumed with the same methods that were followed during the previous rounds of talks. Instead, he highlighted that Sudan aims to discuss creating different negotiation approaches and methods.

The negotiations come only a few days after US President Donald Trump said that Ethiopia broke a deal he had worked on to resolve the dispute, and said he has since cut off millions of US dollars in aid to Addis Ababa.

Trump said that no one can blame Egypt if it [Egypt] “ends up blowing up that dam”, describing the situation as “very dangerous, because Egypt is not going to be able to live that way”.

Trump’s controversial remarks came as he announced, on Friday, that Sudan had agreed to normalise relations with Israel. The agreement makes Sudan the third Arab country to do so, following the UAE and Bahrain, in the new wave of normalisation deals within only two months.

Egypt has, on several occasions, insisted that it will adhere to negotiations to reach a comprehensive, binding, fair, and balanced agreement on the GERD’s filling and operation.

The country fears that the Ethiopian Dam could threaten its 55bn cbm share of the River Nile’s water, although Ethiopia insists that the dam will not negatively affect Egypt’s interests.

Water from the River Nile makes up more than 90% of Egypt’s water supply. The current annual per capita share of water in Egypt stands at around 570 cbm, significantly below the water poverty threshold of 1,000 cbm/year per capita, according to the World Bank.