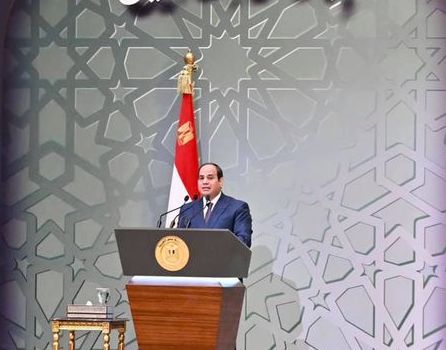 Egypt’s President Abdel Fattah Al-Sisi called for Islam’s reputation to be upheld alongside the spreading of tolerance, during an event to celebrate the Prophet Mohammad’s birth anniversary.

During a speech to mark the occasion, President Al-Sisi called on clerics and intellectuals to work towards spreading the Prophet Mohammad’s teachings, which will help to combat extremism. He further discussed the renewal of religious discourse, which he has done on previous occasions.

The President also called on critics of Islam to refrain from insulting the religion, adding that “attacking prophets and messengers is disrespecting the honourable values of religion.” He added that, if freedom of speech affected the feelings of others, “then it is extremism.”

“Muslims cannot bear the evils of a few deviated groups,” Al-Sisi said, “If you love Prophet Mohammad, be disciplined with his teachings.”

The President also added that he appreciates the role that religious institutions play in spreading enlightened understanding and correcting misconceptions, noting that “this effort must be redoubled.”

Freedoms should stop at the limits of other’s beliefs, he said, adding that the state will spare no effort in supporting clerics, and in providing the appropriate climate for them for the renewal of religious discourse

Al-Sisi also said that extremism cannot be limited to a specific religion, saying, “In all religions there are extremists who seek to stoke the spirit of discord and ignite the fire of anger and hatred.”

In the wake of the murder of Samuel Paty, a teacher who was killed for showing students caricatures of the Prophet Muhammad, French authorities have launched a crackdown on radical Islam, closing one mosque and raided several properties. Earlier in September, President Emmanuel Macron had pledged to fight “Islamist separatism”, and to protect French values and principles.

The reactions in many parts of the Muslim world are growing increasingly vociferous. Macron’s comments have also caused a backlash in several Arab states, among those political players who are close to Turkish President Erdogan and the Muslim Brotherhood group.

Meanwhile, Macron remains adamant in his defence of France’s principles of free speech and secularism, alongside a strict separation of religion and government institutions.

The measures he announced, such as a crackdown on hate speech and the closure of organisations harbouring radical Islamists, are supported by a majority of French citizens, according to a recent poll, particularly among right-wing and far-right voters.

Egypt should have 125 higher-educational institutions by 2030: Al-Sisi