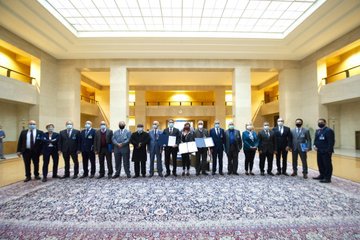 The fifth round of 5+5 Joint Military Commission talks will commence in the Libyan city of Gadamis, from 2 to 4 November. The meeting comes as part of United Nations Support Mission in Libya (UNSMIL) efforts to reach a peaceful solution to the country’s long-time crisis.

The upcoming round of talks comes after the rival Libyan parties signed a complete and permanent ceasefire agreement on 23 October. They will be attended by Acting Special-Representative of the Secretary-General for Libya Stephanie Williams, according to a UNSMIL statement on Saturday.

“Participants will initiate discussions on the implementation of the ceasefire agreement, including through the establishment of sub-committees, as well as on a monitoring and verification mechanism,” the UNSMIL added.

Earlier on Friday, Williams met with Turkish Foreign Minister Mevlut Cavusoglu in Ankara, where they discussed the latest developments in Libya and ongoing preparations for the Libyan Political Dialogue Forum.

Also on Friday, the head of Libya’s Government of National Accord (GNA), Fayez Al-Sarraj, retreated from his intention to resign by the end of October, “in response to urgent internal and external requests, and in order not to create a political vacuum”.

“I note with great respect that Al-Sarraj intends to clear the way for a new government,” Maas said in a Friday statement, “However, we would welcome if he could continue to perform his duties for the duration of the Dialogue Forum.”

It said that the Libyan parties “agreed that all military units and armed groups on the frontlines shall return to their camps”.

UNSMIL also said, “This shall be accompanied by the departure of all mercenaries and foreign fighters from all Libyan territories land, air and sea within a maximum period of three months from today.”

The ceasefire agreement was welcomed by Egypt, Germany, Russia, and the EU. However, Turkey said that the agreement “did not appear to be credible”, and that “it was not made at the highest level”.

Turkey has deployed thousands of mercenaries to fight with the GNA in Libya, according to the Syrian Observatory for Human Rights. The UN also said that hundreds from the Russian Wagner Group are operating in Libya with the Libyan Arab Armed Forces (LAAF), headed by Commander Khalifa Haftar.