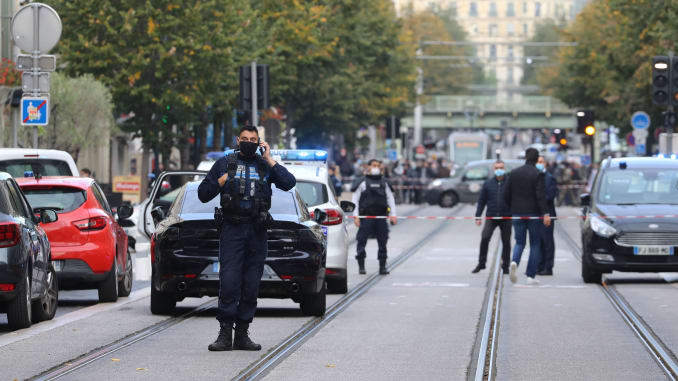 Two more men were arrested, on Sunday, in connection with a fatal knife attack that left three dead at a church in the southern French city of Nice.

The latest arrests, which took place on Saturday, bring the total number of people in custody to six, as investigators look at the suspected assailant’s last known contacts, a French police source said according to Reuters.

An assailant shouting “Allahu Akbar” (God is Greatest) beheaded a woman and killed two other people in a church in Nice on Thursday. It is France’s second deadly knife attack in two weeks with a suspected Islamist motive.

The suspected attacker, who has been identified as a 21-year-old man from Tunisia, was shot by police, and is now in critical condition in a hospital.

The latest arrests in the case are two men from the town of Grasse, near the southern French coast close to Nice, BFM TV reported.

France’s chief anti-terrorism prosecutor has said the main suspect in the Nice attack had arrived in Europe on 20 September from the Italian island of Lampedusa, located off Tunisia.