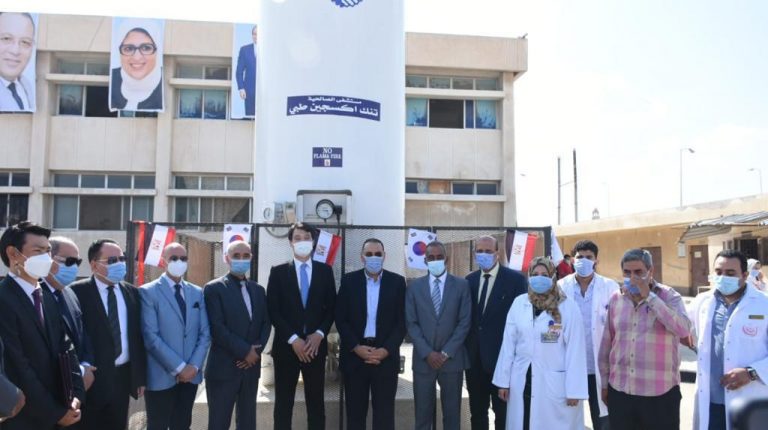 The new devices are an oxygen tank and CT scanner. The giveaways come in recognition of the importance of the health sector collaboration as an important facet for Korea-Egypt bilateral relations.

Ambassador Hong noted that the support came as part of the Korean government’s Official Development Assistance (ODA), worth $200,000. It aims to improve the hospital’s capacity in providing quality health services to the public, and contributes to its efforts to combat the novel coronavirus (COVID-19).

Earlier in May 2020, the Korean government provided $200,000, the first cash support from a development partner country, to fund emergency health response activities as part of Egypt’s efforts against the pandemic. In August 2020, South Korea provided an additional $500,000 worth of medical supplies to Egypt, such as test kits and medical face masks.

South Korean companies have also expressed their willingness to export medical equipment and facilities to Egypt, to help the latter combat COVID-19. This would also see South Korean knowledge and expertise transferred through participating in Egypt’s national projects in the health sector.

Prior to the handover ceremony, Ambassador Hong held a meeting with Sharqeya Governor Dr Mamdouh Ghorab, to discuss economic cooperation between the governorate and South Korean companies.

The ambassador added that Sharqeya governorate hosts several major Korean factories, including renowned LG Electronics in 10th of Ramadan, and Seong-An, which exports “made in Egypt” textiles and provides around 1,000 job opportunities. Ghorab expressed his sincere gratitude for the medical devices, and hoped that economic cooperation between the two sides would expand.

Ambassador Hong said that these examples reflect the Korean government’s commitment to support sectors vital to Egyptian citizens. The commitment adds to existing and diverse cooperation portfolios with Egypt that collectively contribute to more inclusive and sustainable economic growth.

Meanwhile, Ambassador Hong, who was appointed as the Republic of Korea’s Ambassador to Egypt in July this year, has been making efforts to cooperate with the Egyptian government. He has also worked to advance the work of Korean companies in Egypt, through visiting numerous governorates, such as Sharqeya, Beni Suef, and Aswan, last September.