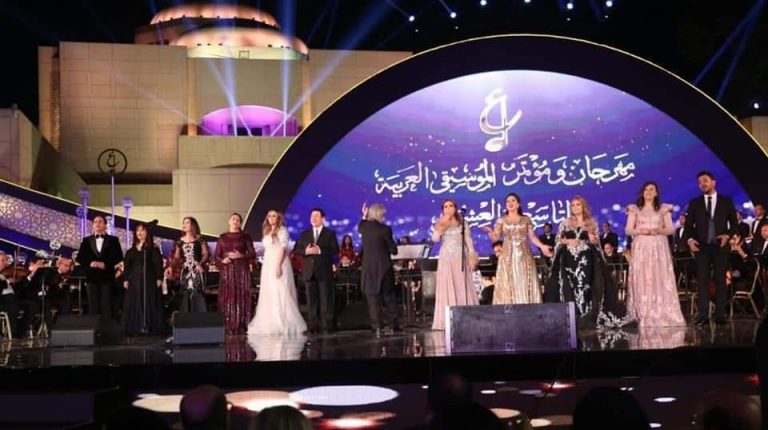 The opening ceremony of the 29th edition of the Arab Music Festival and Conference took place, on Sunday, at the Fountain Open-Air Theater in the Cairo Opera House.

The opening was attended by several leading arts and culture figures, led by Minister of Culture Inas Abdel Dayem, who said the festival carries on the message of founder Ratiba El-Hefny in preserving the nation’s heritage.

In a speech at the festival’s opening, Abdel Dayem said that music is one of the most sublime tools of transcendence and a means to purify the soul. It helps develop awareness to confront intolerance in its various forms, indicating that art and creativity is a unique method for correcting behaviour and upgrading public taste.

She added that the Arab Music Festival defends the identity and preserves the unique heritage of Egypt, whilst also presenting the country’s soft power.

The festival played a prominent role in returning musical and lyrical works to the spotlight and seeks to restore memories of fine art, she explained.

Amid the honouring of acclaimed composers Helmy Bakr, Mohamed Sultan and Gamal Salama, the ensemble of conductor Selim Sahab accompanied many singers in some of the trio’s memorised works.

Songs including Mohamed Ya Rasoul Allah, El-Masreyeen Ahomma, Ommy, El-Modon, Fakrah, Ya Reitak Maaya, Masafat, Bokra Teraf and many other classics were introduced by the ensemble. They were performed by singers, including Nadia Mostafa, Eman Abdel-Ghany, Mai Hassan, Ahmed Ibrahim, Soma, Ayat Farouk and many others.

The festival will be running until 10 November, amid strict safety measures in order to curb the spread of the novel coronavirus (COVID-19). It will host 29 concerts at the various open-air stages of the Cairo, Alexandria and Damanhour Opera Houses, as well as conference activities in Cairo.

This year, 93 musicians are participating in the festival, including 82 singers from five countries, including Egypt, Lebanon, Jordan, Iraq, and Tunisia.