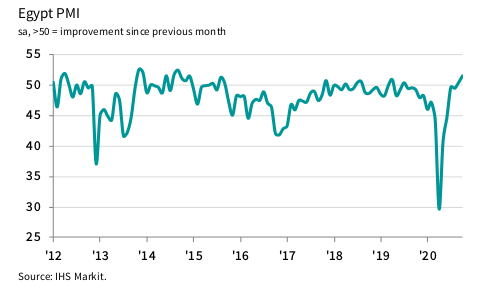 Egypt’s non-oil private sector economy grew to a six-year high in October, growing at the strongest rate since the end of 2014, according to the latest PMI survey data by IHS Markit released on Tuesday.

According to the data, growth in both output and new orders strengthened leading to a renewed rise in input purchases. Nevertheless, job numbers fell for the 12th month in a row as sentiment dipped to the weakest since May.

The headline seasonally adjusted IHS Markit Egypt Purchasing Managers’ Index (PMI), a composite gauge designed to give a single-figure snapshot of operating conditions in the non-oil private sector economy, rose to 51.4 in October. This compared to the 50.4 recorded in September, signalling a second consecutive monthly improvement.

“A PMI reading of 51.4 in October signalled that the Egyptian non-oil private sector expanded at the quickest rate in nearly six years,” said David Owen, Economist at IHS Markit, “The relatively strong upturn will encourage businesses, but also highlights the extent of the gap between current and pre-COVID activity levels that firms still need to abridge.”

Owen added, “Growth could accelerate further if restrictions remain loose, although there are still enduring risks that may slow the recovery.”

According to IHS Markit, Egyptian non-oil businesses saw a solid increase in activity at the start of the fourth quarter (Q4), amid reports of improved market conditions that led to a strong rise in client demand. Egyptian private sector firms also noted that they were able to expand capacity due to the novel coronavirus (COVID-19) pandemic restrictions, remaining looser than those seen earlier in the year.

New orders also grew at a quicker rate in October, and to the greatest extent in just over six years. Firms often attributed sales growth to greater market activity within Egypt, and a strong increase in new export business.

Regarding companies’ backlogs, data indicated that it rose for the sixth month in a row, highlighting further pressure on business capacity. Firms noted that they required more inputs to reduce these constraints, which led to the first increase in purchasing since December 2019 that also supported a slight rise in inventories.

On the other hand, the latest data also showed a 12th successive fall in employment. Respondents highlighted that weak revenues and increases in spending elsewhere often led to the non- replacement of workers that had left or retired, while other firms laid off staff. That said, while the pace of decline quickened, it was the second-weakest since November 2019.

“In particular, weakness continues to lie on the employment side, as jobs decreased more quickly,

despite higher output and difficulties with completing incoming work,” Owen said, “Firms noted that they are still struggling to raise the necessary funds to hire new staff, while also indicating weaker optimism as COVID-19 cases rise in nearby Europe.”

Furthermore, business confidence dropped in October, as sentiment regarding the next 12 months of activity fell to the weakest since May, due to concerns of a second wave of COVID-19 cases in Europe. This could have the knock on effect of translating into higher cases in Egypt, and hamper the economic recovery.

Egypt’s PMI for non-oil private sector rises to 40.7 in May