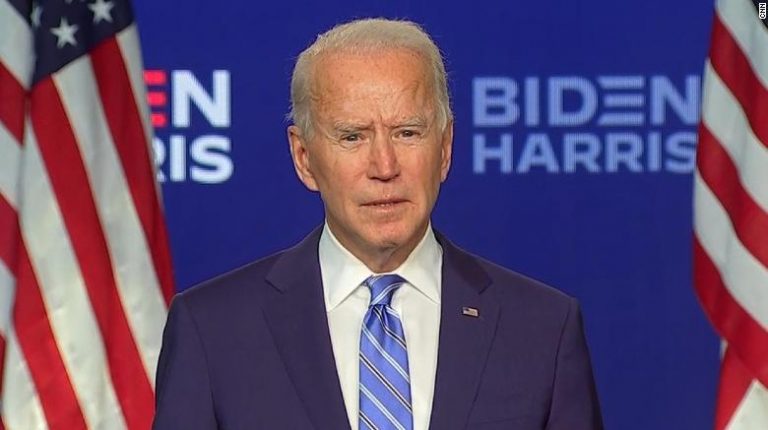 The Democratic Party’s presidential candidate, Joe Biden, has won the White House, becoming the 46th President of the United States.

Biden, who was Vice President under incumbent US President Donald Trump’s predecessor, Barack Obama, secured, on Saturday, 26 electoral votes of Pennsylvania and Nevada, giving him a total of 290 college electoral votes, way more than the 270 votes he needed to win, several media outlets reported on Saturday.

Speaking on Friday night before the news broke, Biden had said, “We don’t have a final declaration of victory yet, but the numbers tell us it’s clear. They tell us a clear and convincing story, we are going to win this race.”

He said that he is on his way to win more than 300 electoral college votes.

Meanwhile the rival candidate and the incumbent President Donald Trump, from the Republican Party, has secured 214 votes (49.3%) so far, as the vote count continues.

House Speaker Nancy Pelosi said, on Friday, that “President-elect Biden has a strong mandate to lead.”

“We [he and his rival] may be opponents but we’re not enemies, we’re Americans,” Biden stressed.

He also spoke about the novel coronavirus (COVID-19) pandemic that is currently widespread in the US, as the total number of confirmed cases reached 10,061,839, with 242,256 fatalities nationwide.

Before Biden’s Friday speech, Trump, who has continued his accusations of voter fraud, told his rival not to “wrongfully claim the office of the President.”

During a speech on Wednesday last week, Trump claimed the results that have been tallied so far in the US election are a “major fraud” against the US public. He added that he “will go to the Supreme Court” over the final US election count.

Trump has repeatedly suggested that mail-in voting could lead to an increase in fraud, although he has provided no evidence to back up this claim.