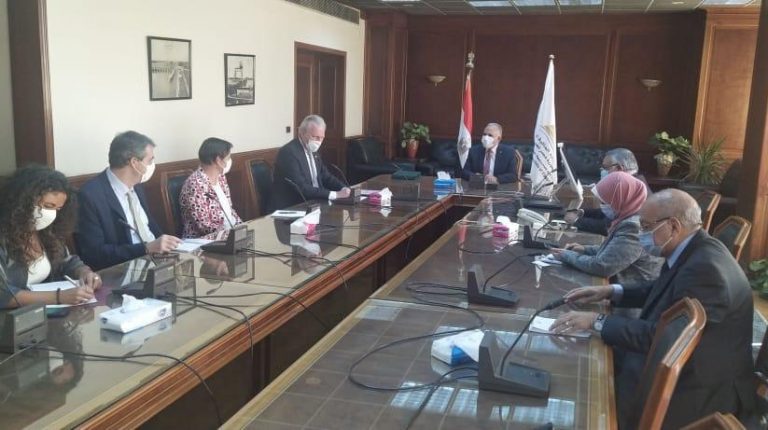 Egypt and the Netherlands signed a Memorandum of Understanding (MoU), on Sunday, to set up joint cooperation relating to water resources management projects.

The MoU was set to be signed by Egypt’s Minister of Water Resources and Irrigation Mohamed Abdel Aaty and the Netherlands’ Minister of Infrastructure and Water Management Cora van Nieuwenhuizen.

Due to the current impacts of the novel coronavirus (COVID-19) pandemic, the Dutch Ambassador to Egypt Han-Maurits Schaapveld represented his country during the signing ceremony, in place of Nieuwenhuizen, as part of the Egyptian-Dutch Advisory Panel on Water Management.

Mohamed Sebaey, Spokesperson for Egypt’s Ministry of Water Resources and Irrigation, said that the MoU is part of the long-term cooperation between Egypt and the Netherlands in the field of water management.

Both Egypt and the Netherlands are defined as downstream countries, with both also threatened by the dangers of climate change, especially in their river delta areas. This has been attributed mainly to the impacts of climate change.

“For over 40 years, the Netherlands and Egypt have been working together successfully on water resources development,” Schaapveld said, “During the annual High Level Water Panel, new development projects are initiated to enhance cooperation between the two countries’ governments, businesses, knowledge institutes and non-governmental organisations.”

Since its establishment in 1976, the Egyptian-Dutch Advisory Panel on Water Management has worked to support the exchange of experiences between the two governments in the areas of planning and management of water resources.

Other areas of cooperation include: maximising the return of water in agriculture; improving water quality; developing sewage treatment technologies; and creating integrated management for coastal areas.

The panel consists of representatives from Egypt’s Ministries of Water Resources and Irrigation, Agriculture, and Housing, as well as the Holding Company for Water and Wastewater. The Dutch side is represented by the Ministries of Foreign Affairs, Infrastructure, and the Netherlands Water Partnership.

Egypt and the Netherlands have intensively cooperated on water projects for over 40 years, and the Egyptian-Dutch Advisory Panel on Water Management plays an important role in this.

The panel’s importance lies in the opportunities it provides for knowledge exchange and the ongoing policy dialogue between the two countries at governmental level. It also involves the private sector, knowledge institutions and NGOs.

The form of this cooperation can vary from exchange of policy views, expertise & know-how, to capacity building and facilitation of cooperation between organisations in both countries. The Panel meetings take place alternately in the Netherlands and in Egypt.

The panel consists of Dutch and Egyptian representatives from the relevant ministries, private sector and knowledge institutions. The panel is led at the ministerial level by the Water Ministers from both countries.

Both countries renewed this long-standing cooperation by signing the MoU, which acts as a framework for cooperation under the Egyptian-Dutch Advisory Panel on Water Management.

Egypt and the Netherlands commenced on water cooperation projects in 1976 with large-scale projects to provide Egyptian agricultural areas with “sub-surface drainage”. This was necessary because, after the construction of the High Aswan Dam, the natural water regime of the River Nile’s irrigation had become disrupted.

At that time the Water Panel was also set up for policy dialogue and knowledge exchange in the field of water (and drainage). The Panel was developed into an advisory body to support the Development Cooperation water programme in Egypt.

Themes that have been deployed over the past 40 years include: water governance and the introduction of the Dutch Water Board model (Waterschap) into the Egyptian system; wastewater management; IWRM; and water efficiency in agriculture, aquaculture, coastal management and capacity building.

The Netherlands is contributing €24m over four years until 2022 to development cooperation projects in Egypt’s water and agriculture sector. The aim is to support Egypt in its quest to sustainably rationalise water use, enhance water availability, increase food security, and address water management challenges facing Egypt.