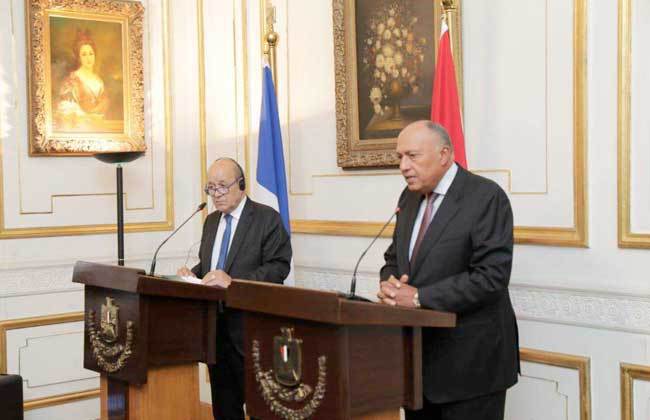 Egypt’s Foreign Minister Sameh Shoukry met with his French counterpart Jean-Yves Le Drian to discuss a range of topics, including the situation in the Eastern Mediterranean and work on strengthening security and stability in the region.

During a joint press conference, Shoukry said that the two sides also discussed the situations in Syria, Libya, Iraq, and Yemen, explaining the importance of joint cooperation between the two countries in combating terrorism.

The Egyptian minister said it is important to establish an independent Palestinian state with East Jerusalem as its capital, as part of a two-state solution. There is added importance attached to reaching a comprehensive and just peace in the Middle East region.

Shoukry condemned the recent acts of terrorism in France, and highlighted that they are not linked to the Islamic religion. Whilst condemning all acts of terrorism, he pointed to the joint efforts between Egypt and France in eliminating these actions.

He highlighted the complete separation between terrorist acts and any religion, and that these acts aim to achieve political purposes only. The minister also pointed out that all agencies in the two countries have broad cooperation at all levels, and are working to strengthen this relationship during the next period.

Shoukry said that the meeting with his French counterpart touched on several issues related to the eastern Mediterranean and the importance of working to consolidate stability in this region in accordance with international law. He stressed that Egypt and France share a common vision on many regional issues, especially Libya.

He made note of the joint Egyptian-US relations which have extended for decades, and which represents a strong strategic partner for Egypt at the bilateral level. This cooperation is set to continue with the administration of President-elect Joe Biden, as Egyptian-US relations are based on mutual interests.

Regarding the situation in Libya, Shoukry indicated Egypt’s support for the political path in its neighbouring country, adding that there are no military solutions in the pipeline. An official ceasefire is necessary to give the Libyan people an opportunity for a Libyan-Libyan dialogue.

The minister added that Egypt plays a role in bringing together the Libyan parties, and that there is no room for the armed militias and mercenaries to be involved in any work related to the Libyan issue.

Shoukry condemned the regional interference in Libya’s internal affairs, and that Cairo continues to strengthen its support for a Libyan agreement and conducting free elections in the country.

He indicated that Egypt does not have any ambitions in Libya, but is monitoring any threat to its national security, stressing Cairo’s aspiration for the dialogue to result in strengthening the peaceful path.

For his part, Le Drian stressed the importance of the bilaterally Egyptian-French relations. He added that France is keen to maintain its multiple and extended strategic relations with Egypt, and that there are some challenges that both countries face.

He said that many issues were discussed during his meeting with Shoukry, particularly with regard to terrorism, adding that France has a deep respect for Islam.

He stressed that Muslims in France are part of the history and identity of the French Republic, and that they are fighting terrorism and extremism. The battle against terrorism is not being fought by France only, but by the entire international community as well. Le Drian praised Egypt’s role in fighting extremist groups.

The French minister explained that the situation in Libya is going well, particularly with regards to the ceasefire, and that Cairo and Paris are sticking to the departure of mercenaries. At the same time, both sides are also respecting the embargo on the supply of weapons to Libya.