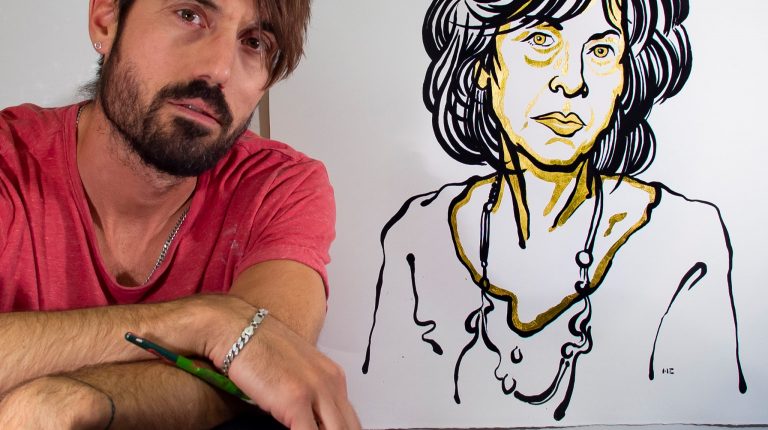 The unique gold-leaf portraits of the Nobel Laureates have gained widespread worldwide acclaim over the past few years, alongside achieving global fame for the prize winners.

These stunningly exquisite portraits are drawn by Niklas Elmehed, who has been the official portrait artist for the Nobel Prize since 2012. Over two weeks every October, his portraits are circulated on social media and many international news platforms. 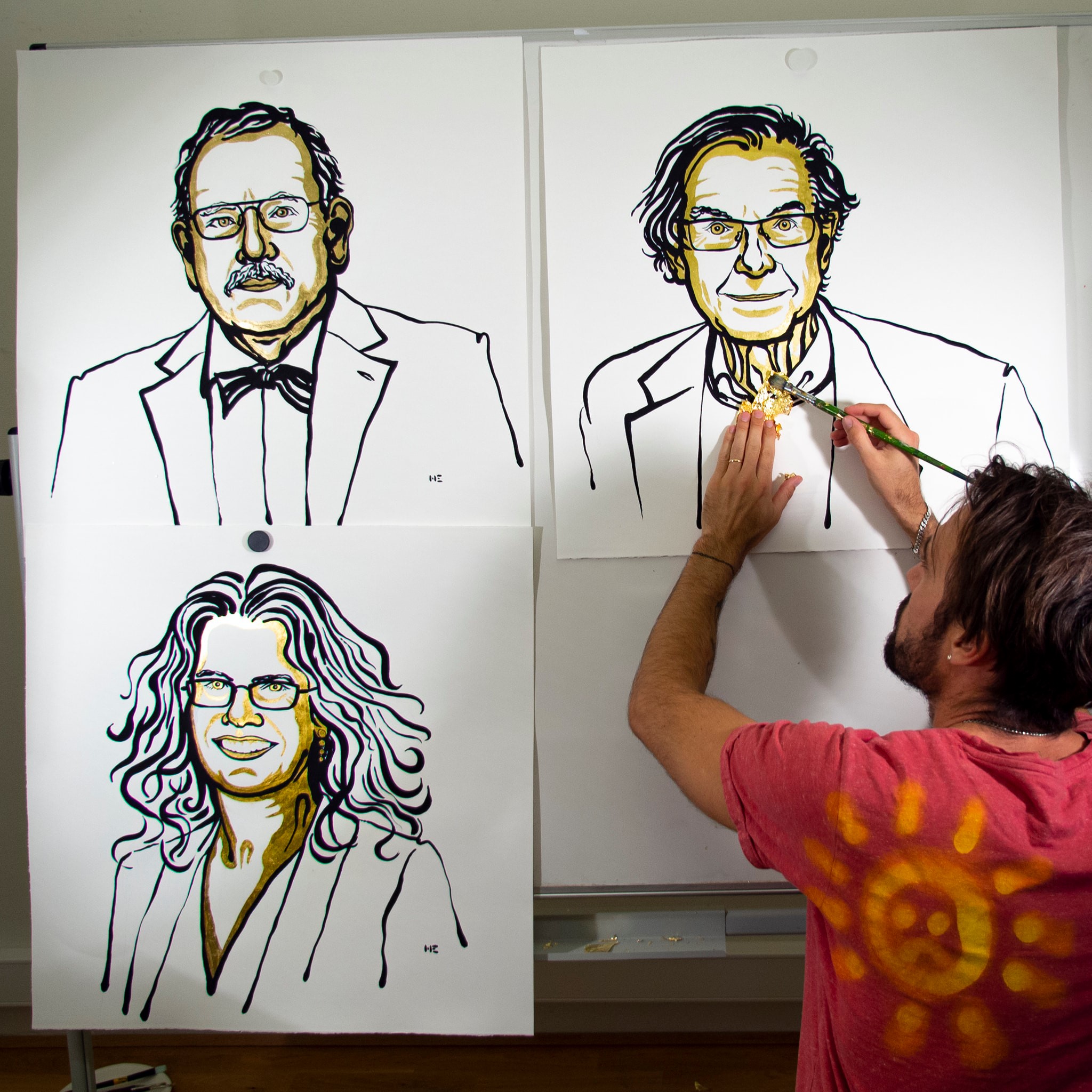 The Swedish artist was, in 2012, employed as an art director for the Nobel Media, before going freelance after 18 months.

Alongside their display in the Nobel Prize Museum, Elmehed’s portraits are digitalised and published on the Nobel Prize’s digital channels, released in conjunction with the announcements of each prize’s winner or winners.

He paints the portraits using a mixture of gold foil and black vinyl paint, to create simple yet detailed renditions of those who, in the previous year, “have conferred the greatest benefit to humankind,” in Alfred Nobel’s own words.

Elmehed sat down with Daily News Egypt to delve deeper into his paintings for the Nobel Prize, his career path, and other art projects.

Give a chance to painting

As a child, Elmehed used to paint all the time, but did not think that he would ever become an artist. He chose at first to study science, as this was a safer (and more stable) way to find a job.

However, after a year, he felt fed up with this choice, and that “this was not what I like to do – this is not me.” He returned to painting, and decided to give this career path a chance.

“The best thing [for me] as an artist is that I choose whatever I like to do, and it is the ultimate freedom,” Elmehed said, “If I like to paint a flower I do that, this portrait or this cartoon I do that, but of course, you have to choose something people will buy, and it is then the freedom will slowly disappear.” 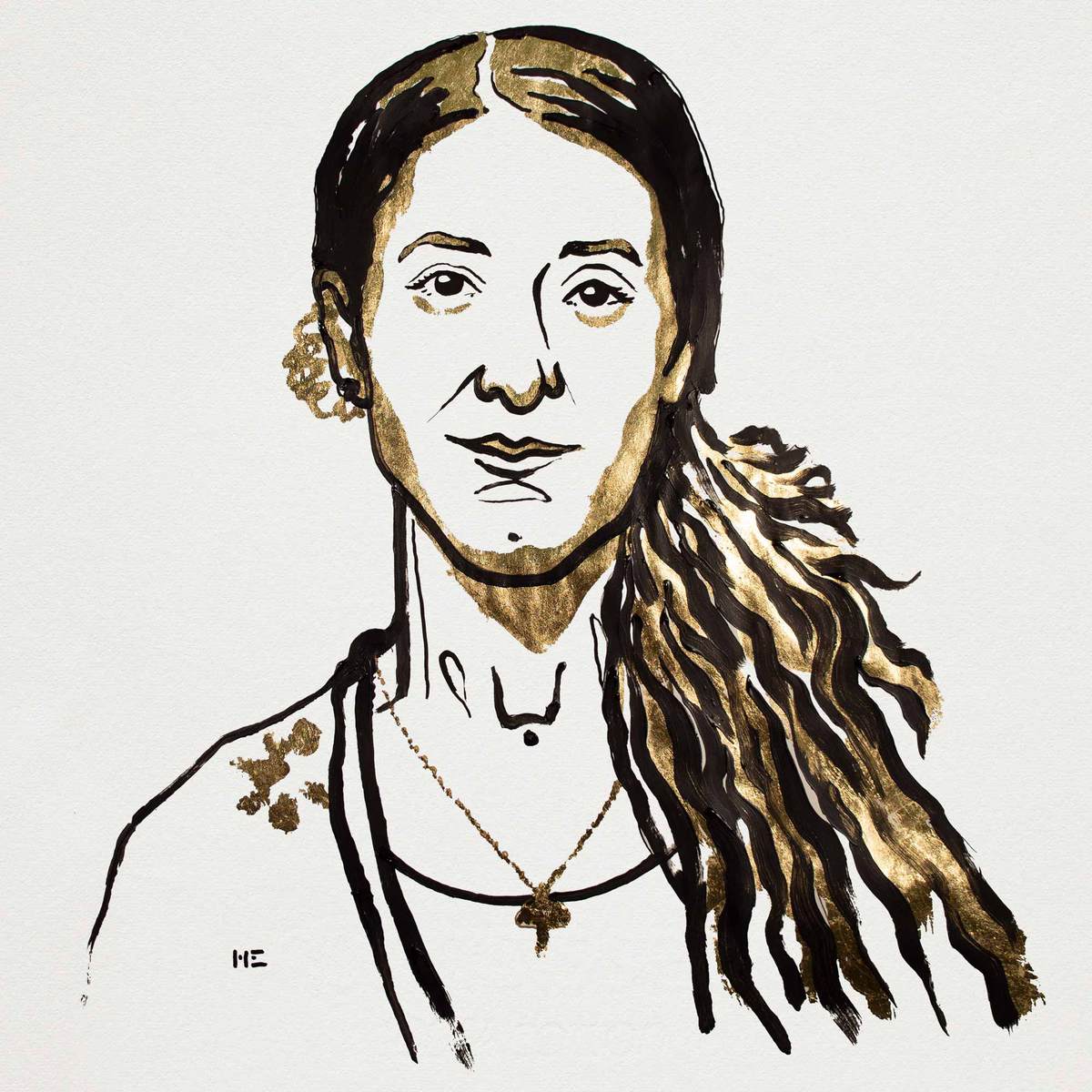 In addition to painting, the Swedish artist likes to do consultancy work, motion graphics, design, and graphic design, as well as the animation work for the men’s and women’s Swedish national football teams. His talents don’t just end there, as Elmehed is also a photographer.

“I have done a lot of photography for the Nobel Prizes, and this included the ceremony when they hand out the prizes and the concert in December, although it is not a full-time job,” Elmehed added.

As photography and paintings have many similarities, Elmehed also points out the differences in artistic freedoms that both art forms provide.

“With the camera, you normally go with what the camera chooses for the images, but if you paint you can represent shadows and forms in a totally different way, and the viewer will still understand what they see,” he said, “I prefer to paint, but I also work a lot in photography, and sometimes you can mix them together as I do in the Nobel portraits. Of course, I need to have photographs as a base for the portraits of the Nobel Laureates.”

He added, “The painting of the Nobel Laureates is something in between, I need a photo and I need a painting, then I do something that is a mix of those two.”

The purpose of this method, Elmehed said, is to have a very strong impact on the viewer and the feeling that this is breaking news from the Nobel Prize committee. 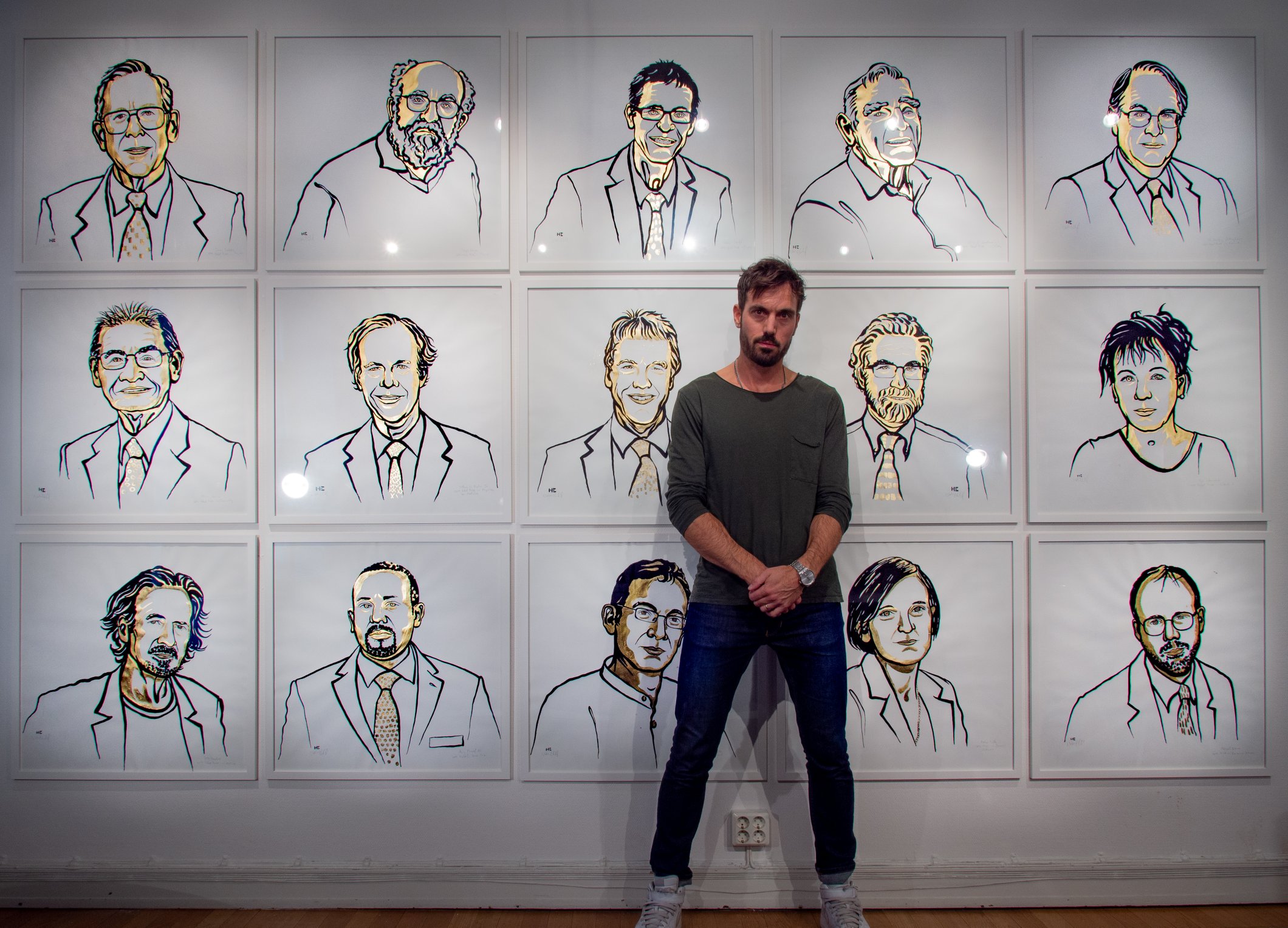 When Elmehed was offered the chance to work for the Nobel Media, the organisation behind disseminating information on the prizes to the public, they told him that they had a lot of problems in accessing photos or images of the Laureates. This, in turn, affected how they could present the news of the winners to the world during the announcements.

“They asked me if I would come up with any solution, such as producing shadow images for the Laureates,” he said, “I responded that I can just do drawings if we do not have a photo, and they said that is actually a good idea.”

At first, he only provided a quick drawing when they did not have a photo of a Laureate, but after two years, the Nobel committee asked if he could develop the style to create something unique for the Nobel Prizes.

Elmehed started to paint portraits of the Laureates, picking yellow and blue as they were the main colours of the Nobel Prizes logotype and site.

“When they released them, they were pretty much an immediate success, because the media picked them up and started to use them,” the artist recalled. 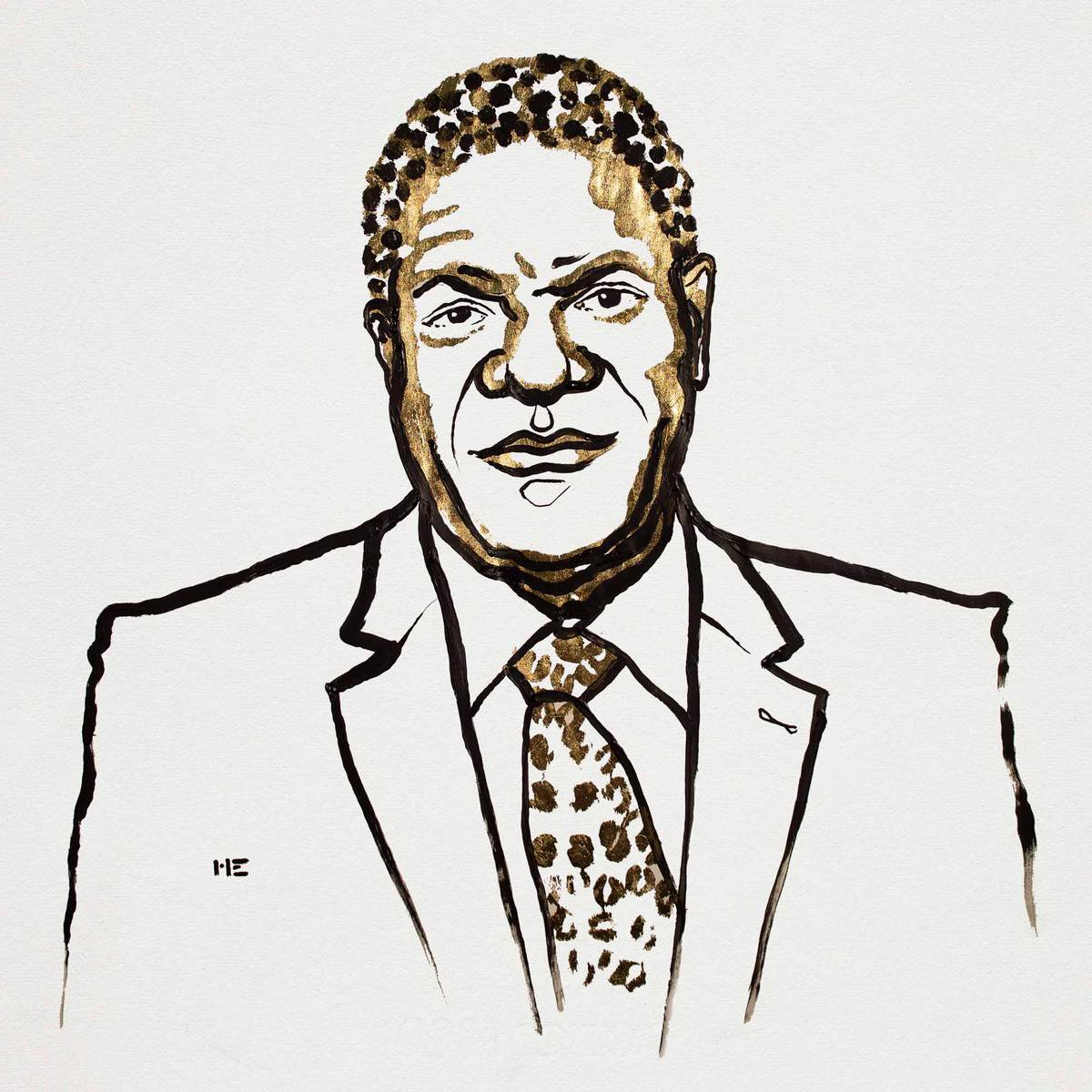 Following the surprise success of this innovative style, the committee asked him to simply skip the photos and go for the joint photo/drawing style for all Laureates. It was at this point that Elmehed’s portraits started to gain increasing fame.

In 2017, the organisers behind the Nobel Prize needed a new graphic profile, Elmehed said, as they would prefer to use gold as the main colour and texture as an updated style of portraying Nobel Laureates. He kept on experimenting and combining different colours of gold, until he reached the current style for the Nobel Prize portraits.

Whilst happy to share details of his artist’s approach to creating the portraits, Elmehed is reluctant to share details on how long it takes him to finish a portrait, of how far ahead of time he is told of the winners. This information is not shared, due to the secrecy surrounding the prizes, although Elmehed did say that he is able to create the portraits quickly.

The Nobel Prize Museum has stated on its website that Elmehed paints the portraits during “a very short period of time.” As of 2020, he said he has painted close to a hundred portraits.

As he has painted many Nobel Prize winning faces, he said that what he likes about these paintings is that everyone has something characteristic in his face.

“I try to get this gaze of the eyes as well as other details, to achieve the intensity needed for the breaking news communication,” Elmehed said.

Among the faces that were both challenging to render but he also cannot forget are Malala Yousafzai, who won the Nobel Peace Prize in 2014, and Bob Dylan, the winner of the Nobel Prize for Literature 2016. 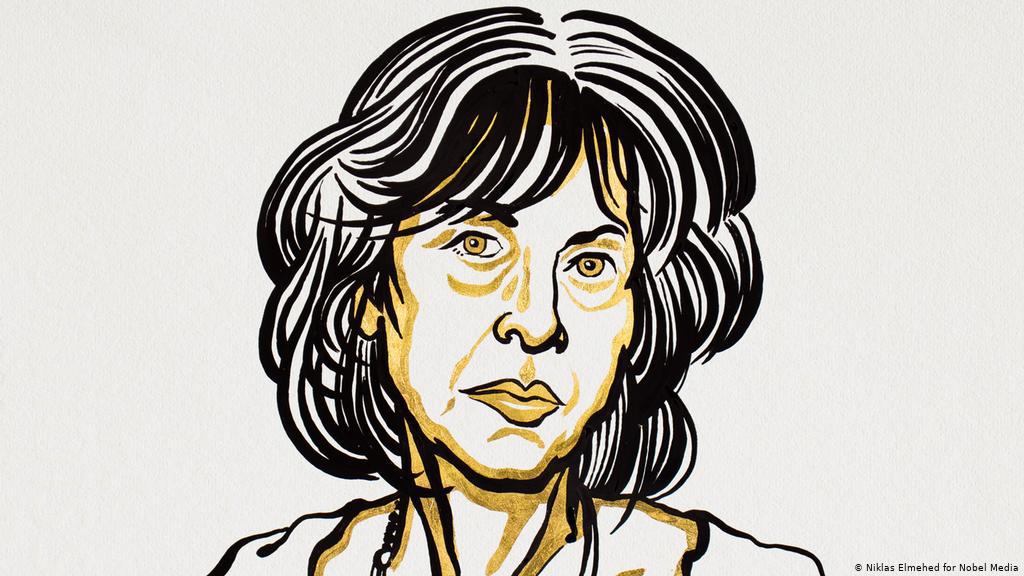 “When you get the name of Dylan, you say to yourself ‘Oh, this will be huge news! This will need more focus’, as such a picture will travel very fast,” Elmehed said.

He added that this also happened when he received the news of Yousafzai’s winning the prize, due to her iconic status and that she was so young, as well as Nadia Murad, who won the Nobel Peace Prize in 2018.

“I am more used to those old men, but with Malala Yousafzai and Nadia Murad, I needed to focus more to paint this face and get the look authentic and good,” Elmehed added, “You have to be very careful when using the brush, because if you do something to emphasise something like a little line, as if it is too much, then you get wrinkles in the painting making the person look much older.”

He said that painting Denis Mukwege, who won the Nobel Peace Prize in 2018, was also something extra as he has this characteristic face, which, when painted, becomes a very strong portrait. 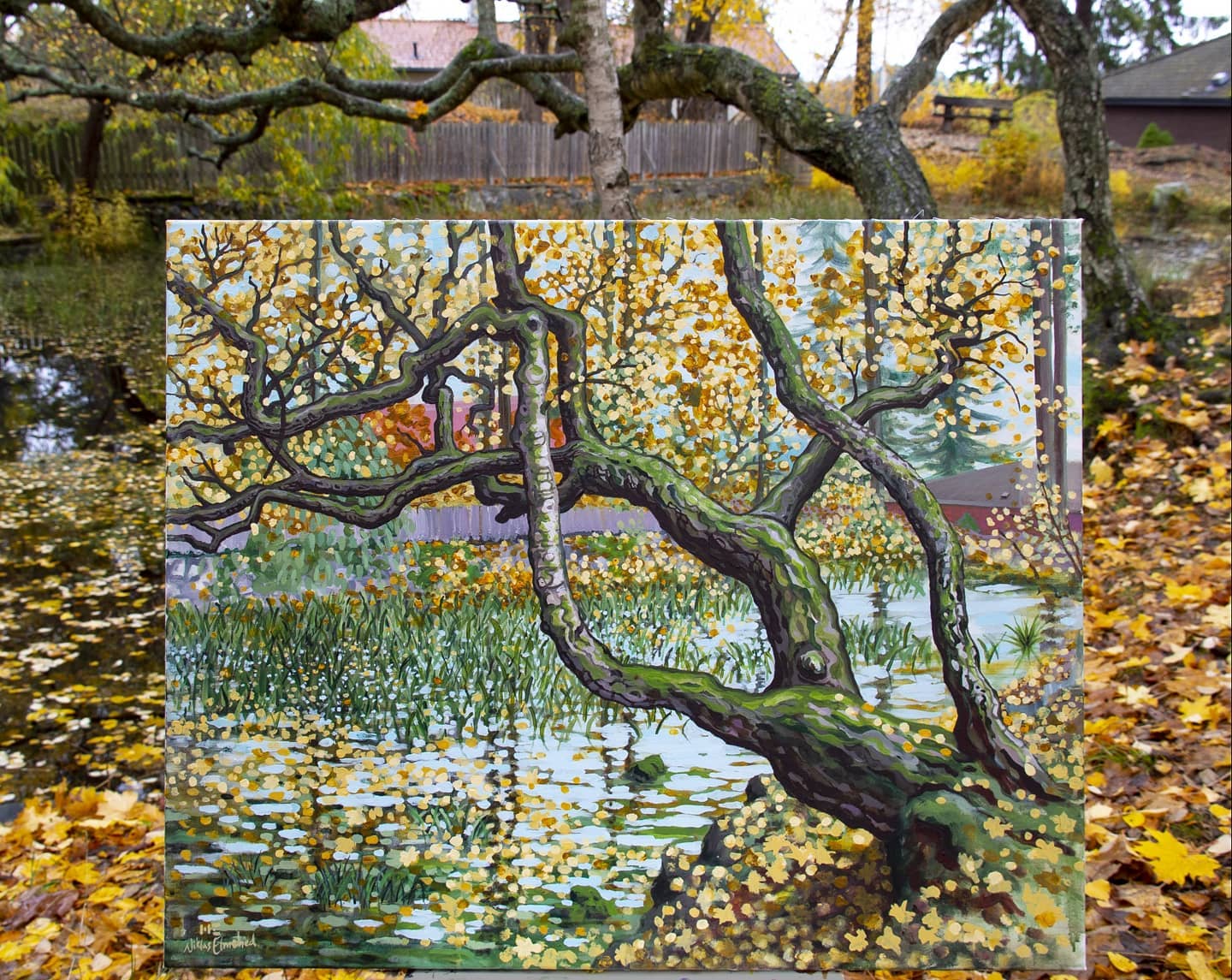 Elmehed noted that he knew Mukwege from colleague and that his winning of the Nobel Prize was expected. “When he got the prize, I said yeah finally I got the chance to paint [a portrait of] him.”

Louise Glück, winner of the Nobel Prize for Literature in 2020, and Japanese chemist Akira Yoshino who won the 2019 Nobel Prize in Chemistry, were also among those faces that the artist found difficult to forget. Elmehed said that Akira Yoshino has a really nice face to depict in a portrait. His face was very characteristic; with hair on the sides of his head. He was smiling all the time. He was also something extra.

Elmehed keeps chasing his artistic dreams, and has other art projects that he is currently working on. He keeps focusing and developing landscape and object paintings, portraying that which does not have to be portrayed in the form of a human face.

“I focus on painting what I see now,” he said, “This is a different art project that I am focusing on. I am very keen on developing this art style.”

Elmehed looks for work with different art galleries, trying to find new collaboration, inside and outside Sweden.

As he focuses on landscape paintings right now, he said that he really likes to watch British painter David Hockney. He also likes the paintings of Frida Kahlo, Andy Warhol, Lucian Freud, and Richard Prince.